Space as a Service to Support Community 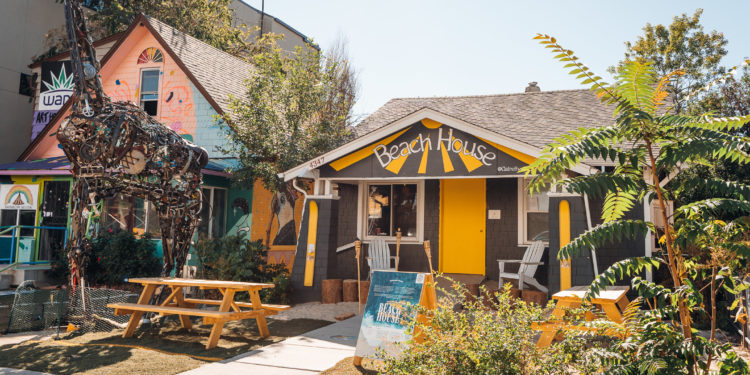 Dubbed The Tennyson House Project, it was the brain child of REACTIV’s activation director, Tim Sack, and came to fruition through a partnership with local community groups wanting to give artists, retailers and startups a temporary home to safely share their creativity with visitors, while stimulating activity in Tennyson’s shopping district. After cleaning up the old, former retail spaces and giving them a fresh new look, REACTIV collaborated with local groups to book the properties with the open call of creating vibrancy for the locality.

The Tennyson Street Project resulted in an immersive art park and community space that breathed new life into three historic buildings and created opportunities for over two dozen local artists. Sack had been eyeing the vacant Tennyson Street spaces since early 2020, yet the developer informed him they would be replaced with new construction. Undaunted, REACTIV rented the vacant spaces, and in a mere six weeks, a team of community minded volunteers converted them into safe ‘retail, rental and art space’ for artists and local businesses.

The initiative evolved to include The Beach House, The Art House and The Club House, incredibly imaginative event spaces for socially distanced gatherings as well as pop-up boutiques with work for sale by artists and nearby small businesses. Importantly, it served as an attraction for a host of interested visitors from local neighborhoods and the greater Denver area. It provided common ground for community members to have fun, shop, experience art, and interact safely during a year when gathering is needed more than ever.

It’s not surprising that community is central to REACTIV’s purpose, as it was founded by Atlas Real Estate cofounders, Ryan Boykin and Jason Shepherd, who baked community involvement into Atlas’ DNA. Community outreach and support has been one of Atlas’ core values since its inception in 2013; it is a foundational pillar of the culture and intrinsic to decision-making, day-to-day operations, and market development opportunities. Therefore, rather than being deterred by the pandemic, REACTIV’s leaders were inspired to find cautious yet inventive ways to forge human connection, using art to establish common ground and demonstrate that commercial space can be used as a service to benefit community.

Pioneering businesses like REACTIV, described as the Airbnb of retail, commercial and office space, have approached the pandemic-induced reality as an opportunity vs. an obstacle, offering unique spaces with the potential to connect vs. separate people. Better yet, such spaces create immediate activation for property owners and affordable space for users; they bring nimbleness to the commercial marketplace and vitality to vacancy.

With a dearth of community activities in 2020, The Tennyson Street Project provided countless visitors with a boost of human connection and a winning proposition for the community, local artists, supporting brands, and landlords.