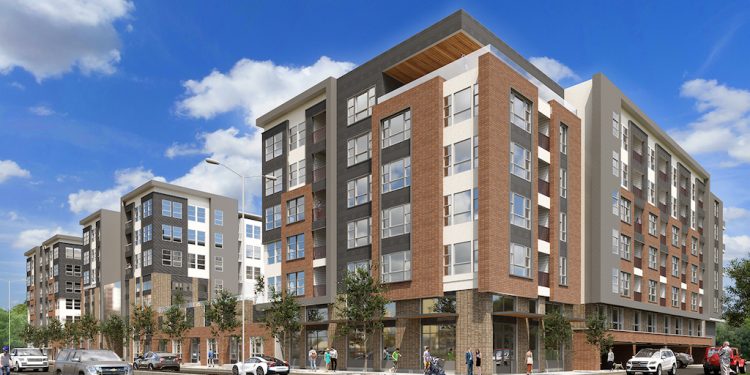 AURORA — Situated directly adjacent to RTD’s R Line, which runs along the I225 corridor in Aurora, Studio PBA’s Alta Fitzsimons is a transit-oriented development poised to serve as a catalyst for development in the surrounding neighborhood. The site, formerly home to a storage facility, is located within walking distance of the Fitzsimons medical campus, across the street from the new VA Hospital, one of Colorado’s largest construction projects. Residents will also enjoy easy access to the Sand Creek Regional Greenway, one of the Denver Metro Area’s largest public open space trail systems.

The design of any building on this site is important not only because of its proximity to the Colfax and I225 interchange, but also because if its location with the new VA Hospital and other Fitzsimons campus buildings as its backdrop. The exterior of the building is therefore composed of materials that convey a contemporary sophistication and an air of solidity. The field and plane changes, both vertically and horizontally, complement the clean design of the surrounding medical buildings and allow the building to stand up to its commercial neighbors.

The variety of materials, treatments, and colors add a consistent rhythm around all sides of the building. Brick in two different colors forms both the base of the primary elevations and reaches up in strategic locations to articulate the plane changes of the upper floors. Stucco in a second color serves as a quality material tying this building to its neighbor across the street, and to the commercial areas of Colfax. The design incorporates recesses in the building façade to break up its mass on the large street blocks.

The leasing center and a community amenity space share a large storefront corner on the southwest corner, visible from Colfax as the front door to the development. This area will be active, well lit, and feel like a mixed-use space fitting perfectly into this extension of Colfax. Amenities include a spacious rooftop deck, swimming pool, community club room, private fitness center, two courtyards, cyber-cafe, a dog wash and dog park.

Alta Fitzsimons was submitted to the City of Aurora Planning and Zoning for Site Plan review at the end of April.

Land on Broadway Sells for $12M