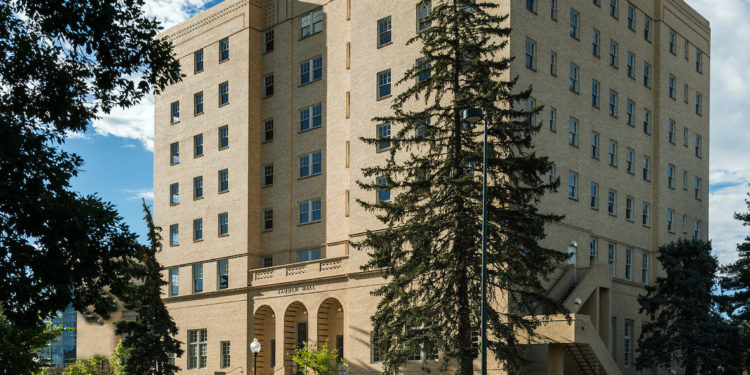 Construction is officially complete on the Tammen Hall historic redevelopment project located on the Saint Joseph Hospital campus in Denver’s City Park West neighborhood. In the midst of Denver’s affordable housing crisis, the project delivers 49 rental apartments for seniors 62 years of age and older who earn 60 percent or less of the area median income. MGL Partners and Solvera Advisors served as the developers, with The Neenan Company as the design-build partner.

With extensive support from the city, state, Saint Joseph Hospital and SCL Health, the redevelopment progresses Denver’s efforts to address housing inequities by providing independent living options for seniors, who are often on fixed incomes and represent one of the city’s most vulnerable groups.

Located less than two miles from downtown Denver, this newly renovated local historic landmark enables community seniors to age in place while maintaining mobility and independence within a market that is becoming increasingly out of reach financially for many residents.

“MGL Partners and Solvera Advisors are thrilled to deliver this visionary project that was made possible by the hard work of many dedicated entities,” said Kurt Frantz, development manager for MGL Partners. “We are proud to lend our development expertise to this meaningful and impactful project that helps fill Denver’s affordable housing needs for seniors.”

“The Tammen Hall redevelopment project is just one example of how we try to use our campus to enhance our community beyond healthcare,” says Saint Joseph Hospital President Jamie Smith. “This solution is the best of all worlds for us because it preserves the neighborhood’s historic character, adds more affordable housing to the community and aligns with our mission.”

Named after Harry Tammen, the first publisher of The Denver Post, the building was built in 1930 as a nurse dormitory for Children’s Hospital and was later converted to office space for the organization. The building has been vacant since Children’s Hospital, now Children’s Hospital Colorado, moved to the Anschutz Medical Campus in Aurora in 2007. The renovation preserved several original spaces within Tammen Hall including a theater and a community room available for neighborhood meetings and events, along with the historic entry and foyer. All exterior and interior renovations comply with National Park Service standards.

Having broken ground in June 2018, the redevelopment is located at 1010 E. 19th Ave. near downtown Denver. The eight-story, 52,000-square-foot facility features common areas on the first floor, one- and two-bedroom apartments on the second through seventh levels, and a common area and rooftop patio for residents on the top level.

“What an honor to work with MGL Partners to collaborate on a much-needed affordable living project in Denver,” said David Shigekane, president of The Neenan Company. “Our employees and consultants find meaning in being part of the creation of Tammen Hall. It is an amazing effort by all involved.”

Tammen Hall marks the second affordable housing project for The Neenan Company, which completed Leadville’s Tabor Grand Hotel Apartments in 2015. Children’s Hospital Colorado oversaw the restoration of murals created by renowned Colorado muralist Allen Tupper True, which were original to Tammen Hall and have been returned to the building for display. Silva-Markham Partners serves as the property manager.