YOU ARE HERE:Home » Architecture » The Source Hotel + Market Hall Named “Innovative Project of the Year”
ArchitectureDevelopmentHospitality 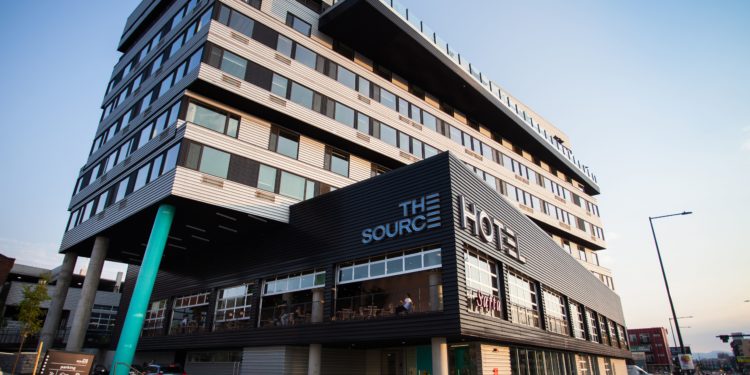 DENVER – The Source Hotel + Market Hall, a collection of independent retail, restaurants, and design-forward hotel rooms, was recently awarded the “Innovative Project of the Year” at NAIOP Colorado’s 32nd Annual Awards of Achievement.  NAIOP, the National Association of Industrial and Office Properties, hosts the event to honor the “Best of the Best” in Colorado’s real estate industry. The award was presented to Zeppelin Development, Kaplan Companies and the Union Hotel Company River North on Wednesday, February 20th .

The former 1880s iron foundry and modern hotel tower combine to form a hospitality, retail, art, design, and culinary complex unlike any other destination in Denver.  The hotel nods to the industrial roots of its home in RiNo.

As one of the first hotels in RiNo, The Source Hotel + Market Hall further cements the neighborhood’s reputation as Denver’s cultural hub during a period of unprecedented growth in the city. Completed in August of 2018, the hotel is managed by Source Hotel Company LLC, a partnership between Zeppelin Development, Kaplan Companies and Union Hotel Company River North with design efforts led by award-winning Dynia Architects.

The property has been profiled by some of the most respected publications nationally and internationally including Wallpaper, The New York Times, AFAR, Forbes and countless others. Denver Post’s architecture critic even went as far to ask the question if the hotel will be “Tomorrow’s Brown Palace?” stating that it has “the potential to become a landmark for the ages.”