YOU ARE HERE:Home » Brokerage » Trevey Commercial Restore a Landmark Centennial Center to its Former Glory
BrokerageRetail 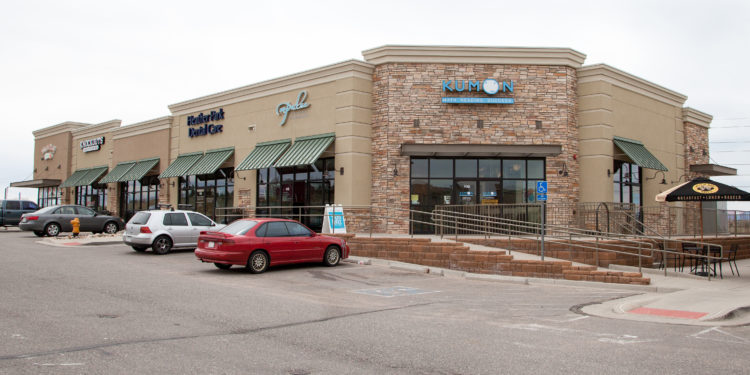 Trevey Commercial Real Estate recently announced the 100 percent occupancy of the Lazy Hills Common retail center in Centennial. The landmark center, which sits prominently atop a large sandstone retaining wall at the NEC of Parker and Lewiston (6202 S. Parker Road), went through tough times along the way.

“When we first evaluated the property we found it had long-term issues with pervasive vacancy, leases all coming to term, and several existing tenants behind or not paying rent. We knew immediately the property would require a great deal of effort from ownership, property management, as well as the leasing team” stated Patrick McGlinchey, associate director at Trevey. “However, it was clear under the issues we still had a Class A retail center with several hundred SF of Parker Road frontage, beautiful buildings, and well-located being just north of the Parker and Arapahoe power center intersection.

Knowing the road ahead would not be an easy one, Trevey took on property management responsibilities for a short-term, transitionary period to ensure the issues could be addressed cohesively. “Upon taking over the property management, we immediately discovered three separate tenants either unable or unwilling to pay rent. We had to balance evicting these tenants with the needed property management expenditures, all the while ensuring the property continued to cash flow enough to cover the loan” Jennifer Smith, Trevey Commercial’s assistant property manager stated.

Following the removal of the three tenants, Lazy Hills sat for a brief time with over 33 percent vacancy. “We had a great deal of leasing interest, but we wanted to avoid the mistakes which had been made prior that lead to the current state of the center. We ignored the easy options in favor of good, long-term tenants who would be a benefit to the center for years to come” adds Justin Gregory. In total, Justin and Patrick renewed and/or leased nine of the eleven tenants in the center over the course of two years – new tenants include Rocky Mountain Spine and Sport, Jamba Juice, and F-45 Training.

“Completing this project is very fulfilling” says Patrick, “All projects are not created the same and this required true perseverance and creative solutions. We had multiple terms up, evictions, the need for us to step in as property manager, a usury increase in property taxes which resulted in an over $5/SF bump in the NNNs, and we were able to turn around the center and make it a crown jewel in the ownership’s portfolio,” added Justin Gregory, associate broker. “If your an owner of a problematic asset it can be very tough to know who to call. The amount of time, effort, and knowledge needed to see a project through to the end is not something every broker has or is willing to offer. We’re proud to point to Lazy Hills Commons as one of many projects that back us up as being the ones to call!”