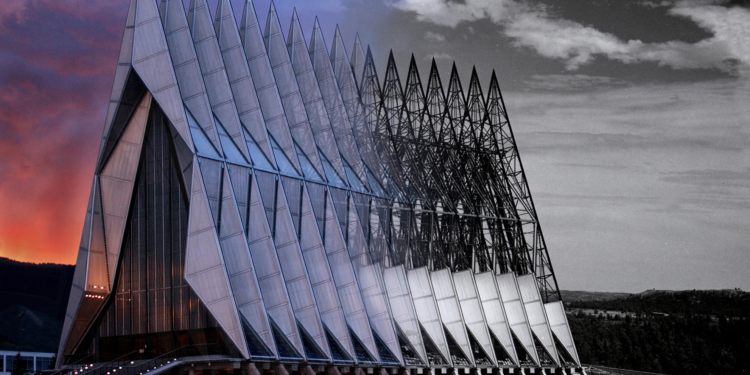 The renovation is extensive, requiring the structure to be closed to the public until fall 2023. Built in 1963, the chapel is the most visited manmade landmark in Colorado and was named a U.S. National Historic Landmark in 2004. The 52,000-square-foot chapel includes a Protestant chapel, a Catholic chapel, a Jewish synagogue, a Muslim mosque, a Buddhist temple, a Falcon Circle and All Faiths rooms in addition to two sizeable 4,000+ pipe organs.

CD Specialty Contractors has received a contract to provide scaffolding for the renovation. This marks the first project that the company will complete on a historic landmark site.

“We strategized and prepared our proposal to JE Dunn for more than a year,” said Israel Sanchez, vice president of operations at CD Specialty Contractors. “A team of four designers and engineers created a 3D rendering of the scaffolding scheme, which is unique to our niche industry. We look forward to providing the construction backbone to the restoration of such a significant historic site.”

CD Specialty Contractors began erecting scaffold structures at the chapel in early February. The unique scaffold design required engineers and planners to work around the intricate details of the chapel’s infrastructure. Scaffolding will be in place for the delicate removal, cleaning and restoration of all stained glass and aluminum panels, as well as for the organ disassembly which is comprised of 4,000+ pipes.

“After reviewing bids from multiple scaffolding contractors, we decided to proceed with CD Specialty Contractors because of its attention to detail and obvious pre-planning which was evident during the bidding stage of the project. Its 3D presentation and various solutions allowed us to envision the scaffolding on a more holistic level, which also enabled us to better communicate the project plan to all affected trades. This was certainly a differentiator.” said Donny Tennyson, senior project manager at JE Dunn.