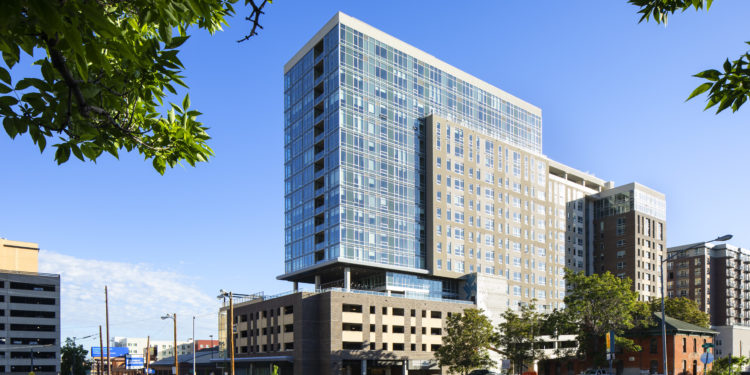 Radiant is everything Lennar Multifamily Communities (LMC) expected – and then some – for its 329-unit, multi-family residential building The Weitz Company built in the heart of downtown Denver.

On May 31, The Weitz Company turned over the project to LMC so residents could start moving into their new homes the first weekend of June as scheduled, bringing the 29-month and $94.5 million project to its conclusion.

“Radiant is a very appropriate name for this project,” said Bruce Porter, executive vice president and general manager of The Weitz Company. “It’s a magnificent building that we were excited to deliver to LMC. Our project team, trade partners and design partner, Stantec, really out did themselves on this one.”

Located at the entrance of the rapidly expanding Welton corridor between 21st Street and 22nd Street, Radiant was constructed on a very complex (and tight) 1.57-acre jobsite. The project was constrained on one side by an operational light rail transit system while the other side was limited by a concurrent construction project across the street.

The cast-in-place structure was erected using two tower cranes. Total project scope covered 486,000 square feet, including the 142,000-square-foot above grade parking garage that makes up the first four levels of the building. The first floor, which also has 3,500 square feet of retail and the building lobby, is enclosed with storage, bike racks and electric vehicle charging stations. Levels 2-4 are open parking garages with storage rooms.

Radiant also features a 9,000-square-foot amenity deck with a pool and hot tub on the fifth floor; a fitness center and a patio on the sixth floor; and panoramic rooftop social lounge on the 17th floor.