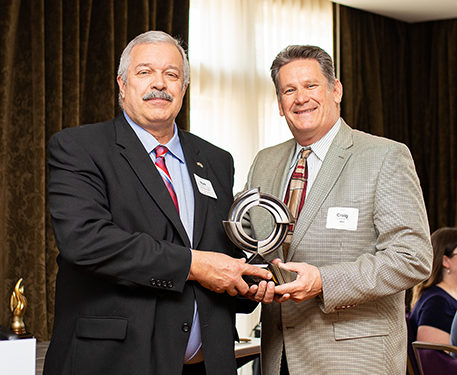 ACEC Colorado Immediate Past President, Craig Watts, PE, from IMEG presented the Orley O. Phillips Award to Mark Hamouz, PE, from Harris Kocher Smith for his significant contributions to the profession, the Council and its programs. Photo: The Unfound Door.

DENVER — The American Council of Engineering Companies of Colorado (ACEC Colorado) honored several individuals for their contributions to the engineering profession and society at its Annual Meeting Luncheon on April 26 at Warwick Hotel Denver.

The highest honor ACEC Colorado bestows is the Orley O. Phillips Award, which is granted to an ACEC Colorado member who has made significant contributions to the profession, the Council and its programs. Mark Hamouz, PE (Harris Kocher Smith – Denver), was nominated for this award by the Past Presidents council and received this award based on his commendable career as both a civil and structural engineer for more than 20 years. Hamouz is a Fellow of ACEC National and a Past President of ACEC Colorado, having served on numerous committees over the years, and continues to participate on the Legislative Committee and licensure issues including the Sunset Review Process.

The next award is the Young Professional of the Year Award, which ACEC Colorado uses to recognize the future potential of an engineering professional. Benny Lujan, PE (CTL|Thompson – Denver) was nominated by Marc E. Cleveland, PE, vice president at CTL|Thompson. Lujan’s most notable professional achievements focus on saving money for clients by using innovative ground improvement methods. One such example includes his co-design of a first-of-its-kind passive dewatering system for three 13-story buildings and a below-grade stadium parking garage at Coors Field, home of the Colorado Rockies. His team removed the risk of decontamination and saved the client $200,000 per year for the life of the building.

This year’s President’s Award features co-awardees Elizabeth Stolfus, PE (Stolfus & Associates – Greenwood Village) and Lauren Evans, PE (Pinyon Environmental – Lakewood) for their commitment to the Engineering Change Lab-USA. This organization is “a social change lab that seeks to connect, share information, and collaborate with individuals and stakeholder groups within the engineering community.” A recent Engineering Change Lab-USA Summit was held at the Denver Museum of Nature and Science in October 2018, where Stolfus and Evans made significant contributions.