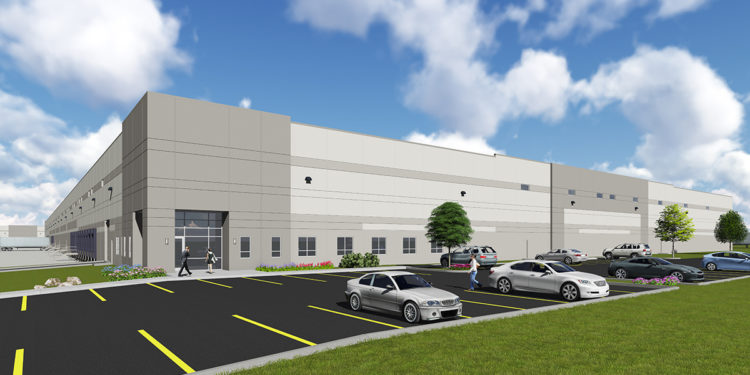 With metro Denver’s industrial market off to a strong start in 2021, Indiana-based Becknell Industrial will break ground on 500,000 additional square feet of warehouse/distribution space at Nexus at DIA, a newly developed industrial park in Commerce City.

The two new buildings are being marketed for sale or lease by CBRE’s Jim Bolt and Mike Camp. The larger of the two buildings will be 329,940 square feet located at the intersection of 84th Avenue and Quintero Road, approximately eight miles west of Denver International Airport. The second building will be adjacent to the first and encompass 170,500 square feet. Both buildings will have Class A finishes including ESFR sprinklers, LED lighting, dock and drive-in doors, 130-foot truck courts and dedicated trailer parking. Clear heights range from 32 to 36 feet. Office space may be built to suit within either building.

“Becknell recognized early on the potential opportunity that the Nexus park offered to Denver’s industrial market, and the impressive roster of tenants that have already committed to the park is a testament to its compelling offering,” said Jim Bolt, vice chairman with CBRE’s Industrial & Logistics practice in Denver.

The property is located near two significant sort hubs for UPS and FedEx. The site offers convenient access to I-70 and I-225 and is less than a two-minute drive from Peña Boulevard and E-470, both with expansion projects underway, further enhancing access to Nexus at DIA.

The site is zoned PUD, allowing for a variety of uses including warehousing, manufacturing, assembly, fabrication, e-commerce, laboratories, food production, airport-related uses with trailer parking and the possibility of outside storage.

”Having access to a master-planned industrial park has allowed Becknell to be awarded and construct facilities for household names such as Haier, TJX Companies and Lowes. We look forward to expanding our footprint in Nexus with the addition of these two buildings to continue to attract new customers,” said Derek Hawkins, senior vice president of leasing and development with Becknell Industrial.