YOU ARE HERE:Home » Reports » Boulder, Denver and Lakewood Among Greenest Powered Cities in the U.S.
ReportsSustainability

Boulder, Denver and Lakewood Among Greenest Powered Cities in the U.S. 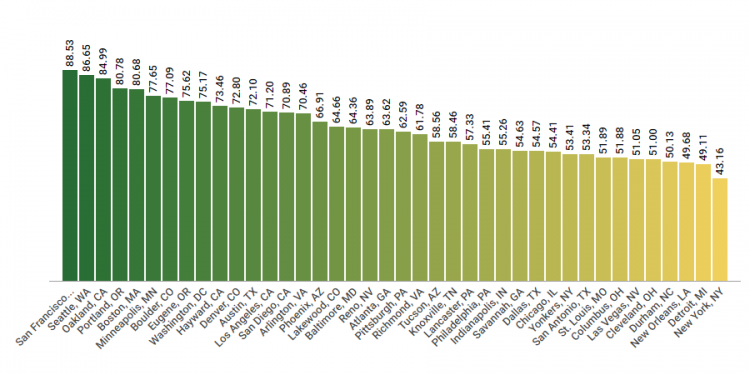 Top 40 most sustainably powered cities in the U.S., courtesy of Yardi.

DENVER — Based on data from various sources including the Census Bureau, U.S. Energy Information Administration and the Carbon Disclosure Project, Yardi scored and listed the top 40 most sustainably powered cities in the U.S., and found that Boulder, Denver and Lakewood are some of the greenest cities in the nation.

Colorado has been diligently turning its power sources green. According to EIA data, more than half of the state’s net 2,536 thousand megawatt-hours of electricity generated in April 2018 was produced from hydroelectric and non-hydroelectric sources. Renewables technology, both harvesting and storage, have advanced far enough that plenty of options have become affordable on a household level.

Colorado state legislators recently saluted this progress by granting utility consumers the right to store energy from renewables, free of any discrimination in rates or in connecting to the grid. This is one of the most important steps taken so far, in support of adopting green energy sources in the U.S., and it is, therefore, no surprise to see Boulder and Denver high up in the list of the nation’s most sustainably powered cities.