YOU ARE HERE:Home » Architecture » Catalyst: The Future of Health-Tech Innovation
ArchitectureConstructionDevelopmentFeatureOffice

Catalyst: The Future of Health-Tech Innovation 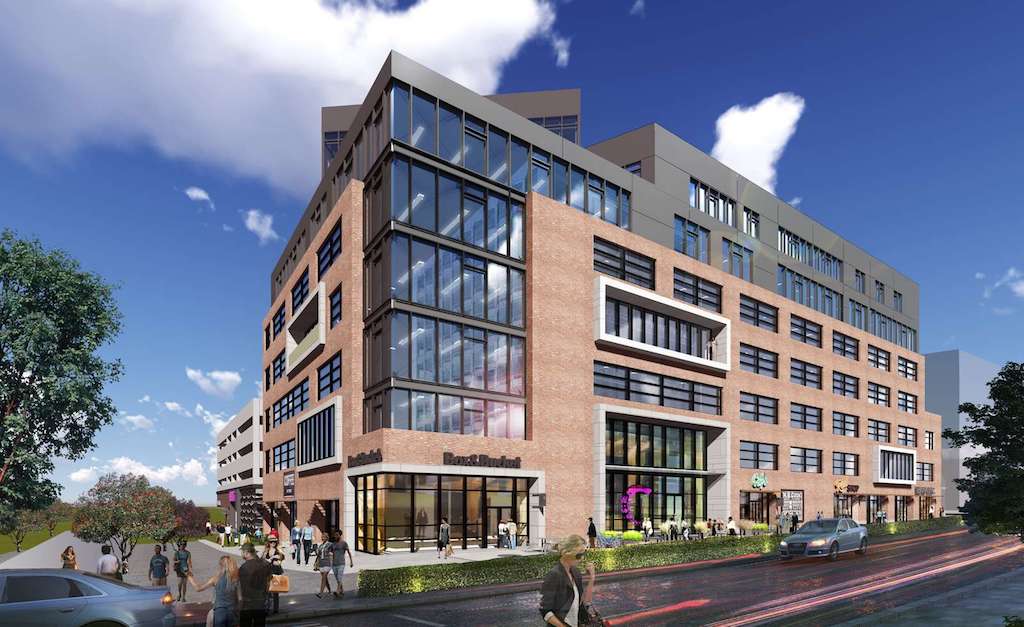 Opening May 2018, the highly-anticipated Catalyst Health Tech Innovation development in RiNo will offer its tenants the mother of all office spaces, equipped with a restaurant, retail, workout facility,  conference rooms, and executive board room with some of the most spectacular views of downtown Denver and the Rocky Mountains. Ideally located on Brighton Blvd., one block from River North Park, Catalyst will offer direct access to the South Platte River trail systems and will be walking distance to the 35 th Street and Blake Light Rail Station.

At a Wednesday evening “Topping Out” event, Dean Koelbel, director of leasing operations for Denver-based developer Koelbel and Company, explained that the city’s $35 million investment in Brighton Boulevard and the South Platte Promenade as well as the unobstructed views, were big draws to the site, “With Great Divide (Brewing Co.) finished, the views are unencumbered above floor two and the views of the southwest are unencumbered because of the River North Park,” said Koelbel.

Koelbel and Company broke ground on the 180,000-square-foot building back in October 2016 and will offer 145,000 square feet of space, all of which is reserved for office space except for 17,000 square feet of retail on the ground floor.

“As designer and builder, we are grateful to be a part of this transformative project with Koelbel and Company and the larger development team,“ said Doug Spuler, managing principal at The Beck Group, a collaborative team of designers and builders, offering planning, architecture, interior design, construction and sustainability consulting services. The first-of-its-kind office building is now 55 percent leased, mostly to health and tech tenants, which is no coincidence as Koelbel marketed the building to health and tech companies intentionally. Entrepreneur Mike Biselli, co-developer of Catalyst HTI, who has made it his mission to reimagine healthcare through innovation, pioneered the concept to build a co-working space on steroids for the digital health industry.“We’re not going to re-imagine healthcare just through the largest and most powerful organizations that have dominated the space for the past fifty years. And it won’t happen with startups alone. We have to do it together. Because if we don’t, we are trending towards a five trillion dollar problem that can bring our country to its knees,” said Biselli.

Tenants will also include other complementary industries to the health-tech world but Koelbel are not afraid to turn away the wrong tenants either. “It’s not just startups, it’s Fortune 500 non-profit academia. We designed the building in such a way that there are serendipitous collisions for these thought leaders to get together,” said Koelbel. “The ultimate goal is to build an environment where collaboration accelerates innovation within both the digital health industry, and the Denver community as a whole.”

One prospective tenant who is considering moving his digs from the Industry co-working space just down the street, to the Catalyst, is Kyle Shannan, founder and CEO of Storyvine, Inc., a tech company that transforms informal mobile video into sophisticated, branded video usable by the world’s largest brands. “I think these hybrid buildings really encourage innovation by co-mingling established companies with startups, acknowledging that they have different needs,” said Shannan.

Unlike a traditional co-working environment, TI Architects Davis Partnership, were less restricted in the design of the space, “Since there’s not a company operating the co-working floor and having to make their lease threshold, we were able to make the space more open and less dense. If you were to compare our space plan to what a WeWork would be, it’s almost half of that,” said Koelbel. The office space was also designed to be in keeping with the RiNo neighborhood, “We wanted to stick with an industrial vibe but elevate that a little and make it more professional and sophisticated,” said a Davis Partnership Architects representative.

The sky is the limit for development in RiNo right now and Koelbel is eager to lease the remaining space on the top three floors, so that they can begin planning a Catalyst II, just a stone’s throw away along Brighton Blvd. “We actually have a phase two planned for this development which will pretty much double the size of the building,” said Koelbel. “We are waiting for the city to rezone and that will give us 12 stories to play with — It’s a unique market right now with all the people and tech-talent moving here and this neighborhood being where millennials are.”