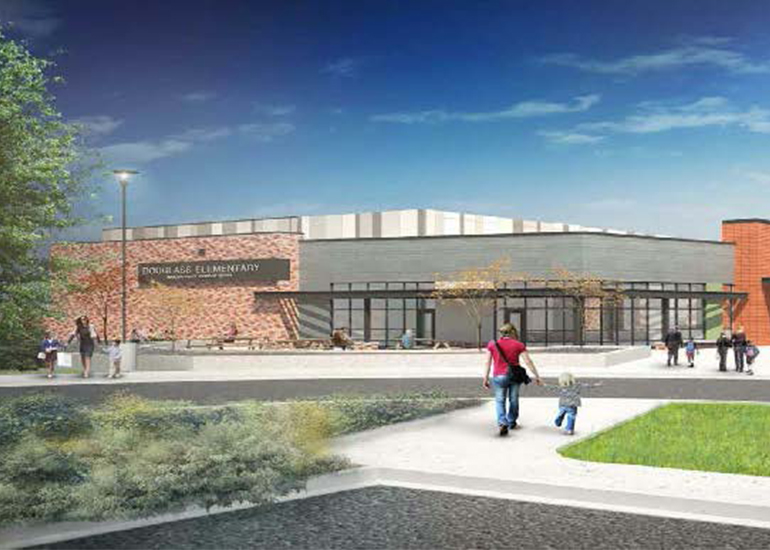 An increasing number of schools in Colorado are pursuing zero net energy — a term used to describe ultra-efficient new construction and deep energy retrofit projects that consume only as much energy as they produce from clean, renewable resources.

Perhaps the biggest incentive for a school to pursue net zero is to cut down on the exacerbating energy costs associated with running a facility. According to the Rocky Mountain Institute (RMI) school buildings in the U.S. are the third-biggest energy user of all commercial building types, not only producing a lot of emissions but also costing a lot of money. Each year K–12 schools spend more than $8 billion on energy — more than they spend on computers and textbooks combined. Which is why both RMI and the New Buildings Institute (NBI) believe schools are a prime market for zero net energy design and operation, in both new construction and deep energy retrofit projects of existing building.

Despite the fact that much of the commercial buildings sector still remains largely unaware of the accessibility of zero net energy design and/or assumes that it is too expensive, the outlook for the future of Net Zero is good. In October 2016 a report released by the NBI, declared that there were 332 buildings in the U.S. that had been either verified as, or were on their way to achieving zero net energy (ZNE) — that’s a 74 percent increase since the last count in 2015. No doubt that number has increased substantially since then.

Pete Jefferson, principal at M.E. Group, a high-performance building consulting engineering firm with an office in downtown Denver, explains how buildings that are not in dense urban environments that do not require going above two or three stories, generally meet the foundational requirements to pursue net zero. Which is why many schools in Colorado are ideally suited to achieving the goal. “It’s very difficult to achieve net zero in a high rise which can pose a challenge in many other states, but in Denver that is typically not an issue. This combined with Denver’s good climate generally makes for good conditions to pursue net zero,” he says.

From a cost perspective, the National Renewable Energy Research Laboratory (NREL) commercial buildings researchers are now utilizing technologies and methodologies that achieve zero energy at little to no additional cost when compared with traditional building methods. NREL’s own 360,000-square-foot net-zero energy Research Support Facility in Golden, CO cost $259 per square foot to build, compared with $250-$350 per square foot for a traditional building.

“Building with the goal of net zero is one way for schools to insulate themselves from future operational cost increases,” says Jefferson. “Prone to increases in teacher salaries and health care costs, a net zero energy school can essentially fix their energy costs giving them more stability.”

Jefferson wrote an article back in 2011 that focused on ME Group’s work on a DPS school in Green Valley Ranch, CO. The Evie Garret Dennis K-12 School — a 1,200-student campus that includes four academic buildings — was one of the first K-12 schools in the nation to target net zero energy use as a goal. “The amount of solar utilized was enough to offset the energy use of two of the buildings there and they did perform at a net zero level for at least a year,” he says. The remaining two buildings were constructed to achieve net zero in the future through a combination of roof-and-ground-mounted photovoltaic systems.

Douglass Elementary, the newest 21st century learning environment, was designed by RTA Architects, an award-winning Colorado Springs-based architectural and interior design firm, and built by Adolfson & Peterson Construction. The school is one of Boulder Districts Five Exemplar Schools that will serve as models of 21st Century approaches to teaching and learning — designed to be zero net energy capable. Construction of the new building is substantially complete and students were welcomed to the new school August 16th. A ribbon cutting ceremony and open house are planned for September 27.

Other exemplar schools that are nearing completion include Erie Campus, which will be slightly more efficient than LEED Platinum — It’s energy use is predicted to be half of what it would be if the building were designed to meet minimum building code requirements. At Creekside Elementary, solar panels will be reinstalled on the building post construction and will provide most of the building’s energy.

But the benefits associated with building a zero net energy school extend far beyond energy cost savings. Other benefits include improved health for students and faculty, increased productivity, as well as an opportunity for innovative education — a net zero school can serve as a built-in learning lab, to teach students about on-site energy generation and storage, cutting-edge technology, community integration and the natural environment.

School in the Woods

One school planning to do just that — that’s still in the preliminary design phase — is a new 14,000-square-foot, Academy District 20 school in Colorado Springs, to be named School in the Woods. Designed by RTA Architects and to be built by GE Johnson, the goal for the new building will be to achieve net zero energy and/or LEED Platinum. The design of the building will focus on environmental, economic, and social components with the idea that the building is in harmony with the grounds and resources that serve as a teaching tool. The design will be simple with flexible learning suite/spaces that incorporate various sustainability features to include natural lighting and outdoor learning spaces.

School in the Woods is one of two new schools being designed and constructed as a result of the district’s $230M bond passage in November 2016. The new building will replace the four existing modular classroom buildings that the school currently operates in, approximately 6,000-square-feet. Included in this project will be the requirement to remove and dispose of all existing modular classroom buildings, cap all utility connections, and restore the site to natural conditions. The school is estimated to be completed in the spring of 2018.

“Because this is School in the Woods we are going to look at more passive strategies both from a heating and a cooling standpoint,” says Doug J Abernethy, principal at RTA Architects.  RTA plan to utilize the Passive House Strategy — a building standard that is truly energy efficient, comfortable and affordable at the same time.

“The Passive House Institute creates super-efficient exterior envelopes of buildings to reduce the amount of energy needed to heat and cool the building. It’s typically applied on the residential side of the equation but five or six years ago we started considering Passive House strategies for our school designs,” says Abernethy. “Our approach over the last five plus years — to get to highly efficient net zero ready buildings — has really been to try and keep systems simple. Where cost gets out of control is through complexity of building techniques or mechanical systems and so we look to build relatively simple buildings that are highly efficient and serve the users appropriately.”

Some significant findings in zero net energy design have come about in the last five years and changed the approach some what. Jefferson — who is working with the Department of Energy on a design guide for net zero energy schools — explains that more emphasis is now placed on designing and testing the building envelope. “We are seeing that air infiltration has a bigger impact on overall energy use than we might of anticipated five or so years ago. So now we are not only calling for better levels of insulation and better glass, we are actually testing during the construction process to make sure what is built is as air tight as we need it to be.”

With the advent of LED light fixtures, Jefferson has observed the energy use associated with lighting in schools drop pretty dramatically. “That’s a technology that has come of age much faster than I think we ever expected.”

Last but not least, the price of solar power — a major component to zero net energy design — has decreased considerably in recent years. “We’re now at that point where solar might be more cost effective than some building energy efficiency strategies,” he says. And, if it’s possible to get an equivalent amount of production from solar that we get from an energy reduction strategy, and solar costs less, then Jefferson suggests, it might be necessary to rethink the approach to net zero in the future.