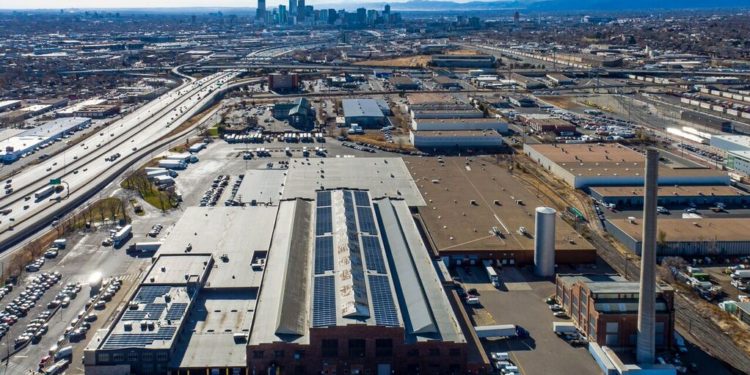 As the subject of last years Rocky Mountain Real Estate Challenge, The Denver Shops, a 40-acre industrial site located at the crossroads of I-25 and I-70 in the Globeville neighborhood, has much of the CRE community eager to find out what will become of the site.

Formerly known as the Colorado Trade Center, the property was acquired by Colorado-based real estate investment and management firm Conscience Bay Company in 2015, that restored the original name, The Denver Shops, to honor the unique history of the site. In 1922 the Chicago, Burlington and Quincy railroad opened the Locomotive Shops and for decades the site was referred to as The Denver Shops throughout the community. The railroad operated on the site until 1955 when it was sold to the Associated Grocers of Colorado that changed the sites operation to cold food storage and distribution. Since then, a number of different distribution tenants have utilized the site including Coors and Purina.

The University of Denver team won the Rocky Mountain Real Estate Challenge for their project “CRUX,” a synergistic mixed-use development that maintained 70 percent of the existing site for industrial use for the outdoor recreation industry.

“We saw it as a good opportunity to rebrand it,” said Ben Woolf, director of Commercial Investments for Conscience Bay Company. “The focus on the outdoor rec industry really helped us hone in on finding an industry to focus on — It does not have to be the outdoor industry because I think they are more suited to downtown, but maybe it’s clean tech or urban agriculture. For us, the Challenge really highlighted the value of the cold food storage use.”

The demand for cold storage industrial property is high in the U.S. A 2019 CBRE study projects that the sector will see strong demand from growth in online grocery sales. “Investors are increasingly targeting cold storage assets in primary and secondary markets throughout the U.S. but interest has been tempered by a scarcity of available facilities and the specialized nature of the industry,” the study says. The Denver Shops site is subsequently in a favorable position for future growth in this industrial segment.

“Originally, we thought we would get to the tear down and repositioning sooner and I think now we see more value in cold storage,” explained Woolf.

Conscience Bay has been improving and maintaining the property ever since they purchased it. In 2019 the company completed the renovation of the Blacksmith Shop and currently they are planning for future renovations that will bring more of the original buildings up to the 21st century standard. The company is also focused on improving the performance of the buildings and reducing resource consumption.

Built in 1922 the Blacksmith Shop is a +20,000-square-foot building that offers 22’ vaulted ceilings with exposed original timber roof deck and steel trusses, brick construction and ample natural light with upgraded windows. The shop is now occupied by Simple Homes, a startup prefab construction and on-demand builder of custom homes. 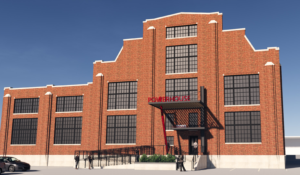 A conceptual rendering of the Power House

The 60-foot-tall Power House building that also dates back to 1922, was originally used to generate steam heat and compressed air. The building is sandwiched between a 300 foot chimney and a 500,000 gallon water tank. Conscience Bay has been working with local Denver architects to redesign the building which could include new mezzanine space. Potential tenants have expressed interest in plans to turn the open space into flexible office space, though that would require securing a unique type of tenant. “There are groups out there that want this type of open flexible office who can’t pay the price of RiNo,” says Woolf.

To better cater to the tenants on site, Conscience Bay has considered adding a café to the Powerhouse with access to grab-and-go foods, so that The Shops 800+ employees don’t have to leave the premises to get access to food.

“We thought it would be really cool to get this Power House adaptive reuse project done in the lead up to The Denver Shops’ 100 Year Anniversary and open it around the same time to celebrate and mark that event,” said Woolf.

Given its location in Globeville, The Shops’ distance from amenity-rich RiNo and the downtown core is somewhat of a hindrance to the property’s marketability. “One of the issues with this property is it feels a little disconnected to the rest of Denver, in fact a lot of people in the city refer to this as “Fox Island” — it’s an issue and we need to find out how to improve access and transportation connectivity.”

However, Denver Shops does have great highway access to both I-25 and I-70 and, according to Woolf, more modern industrial product than RiNo. “In fact, a lot of the tenants that come and look at us are the tenants that have to leave RiNo to make way for the apartments and office,” he says.

The company is also committed to improving the performance and efficiency of the buildings, to reduce utility consumption. The company installed a 316 kW solar system at the Denver Shops, which according to Woolf is one of the largest solar systems in the metro area for a commercial property. The solar actually only provides between 3 and 5 percent of the Denver Shops total power demand because of all the cooled space.

In the long term, the company plans to renovate all of the existing structures on site, possibly turning the flat roof structures, which cannot compete with the new-age high-bay concrete tilt-up buildings, into multi-level commercial space that could include office or flex. “Really we would ultimately like to add more density here to have more commercial space.”