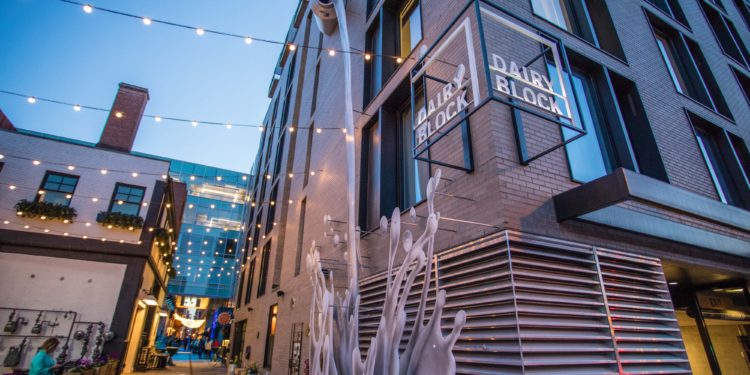 Dairy Block has been honored with a 2021 Americas Award for Excellence from the acclaimed Urban Land Institute (ULI).

ULI is a nonprofit education and research institute with the mission of shaping the future of the built environment for transformative impact in communities worldwide. ULI began the Awards for Excellence program in 1979 to recognize truly superior development efforts in the private, public, and nonprofit sectors. Winning projects represent the highest standards of achievement in the land use profession.

This year, 72 projects and programs from across North America were submitted for the competition, with 12 winners named. The public can view the winners and finalists at the 2021 ULI Americas Awards for Excellence gallery.

McWhinney & Sage Hospitality previously won a ULI Americas Awards for Excellence in 2015 for the renovation of the landmark Denver Union Station.

“Our goal was to create an innovative and inspiring destination for downtown Denver that is a synergy of celebrating the past and present,” said Chad McWhinney, executive chairman and co-founder of McWhinney. “It has been incredible to see locals and visitors alike embrace this one-of-a-kind mixed-use development. Even during the pandemic, the Dairy Block team worked creatively to activate our outdoor urban spaces in new ways and created a place where people can safely gather and create new memories.”

Dairy Block is also an office destination, with more than 10 corporate tenants housing more than 1,100 employees – including Prologis, Hord Coplan Macht, Equus Software and Cuvée – along with the shared office space Flex Office – Denver. Dairy Block’s office tower was awarded LEED Gold Certification from the U.S. Green Building Council in 2017 and the Downtown Denver Award from the Downtown Denver Partnership in 2019.

“Staying at The Maven is the ideal way to enjoy a comprehensive Dairy Block experience – from starting your day with a latte from Huckleberry Roasters to ending it with a crafted cocktail at Poka Lola Social Club, with incredible shopping, art, and dining in between,” said Sage Hospitality co-founder, president and CEO Walter Isenberg. “We are honored to have the entire block recognized as a one-of-a-kind experiential urban development.”