YOU ARE HERE:Home » Construction » Denver Rock Drill Set to be the Finest Example of Industrial Adaptive Reuse
ConstructionDevelopmentFeatureHospitalityOfficeRetail 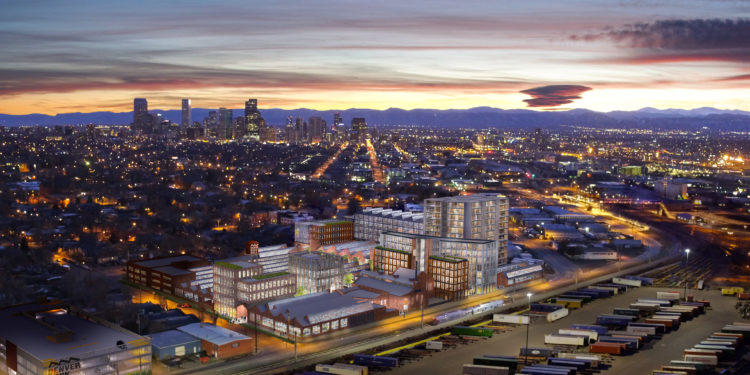 When the one-of-a-kind development Denver Rock Drill breaks ground in the fourth quarter of 2019, the vibrant new mixed-use community will both preserve and revitalize two city blocks — a 700,000-square-foot site in Denver’s historic Cole neighborhood.

“Simply reclaiming old material is only a fraction as compelling as reclaiming entire structures still rooted in their original foundations. Foundations that were placed by hand, held from woven rope, wooden pulleys and horse power from real horses,” says Todd Wheeler, Cushman & Wakefield, who is leading the office leasing for the project. NAI Shames Makovsky is responsible for the retail leasing. 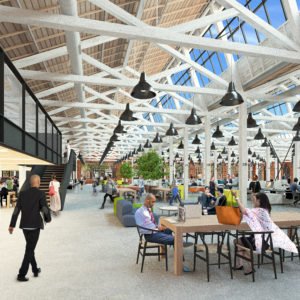 The land, which is owned by the Weiss family, dates back to 1910, when it was the home of Denver Rock Drill Manufacturing Co., whose line of pneumatic rock drills known as “Waugh” drills were used around the world. Built as machine shops, the preserved buildings onsite will provide large, flexible floor plates as well as 28-foot ceilings, allowing significant flexibility for office use, infill mezzanines and more.

“The entire place is dripping with historic treasures. Century old masonry, timber and steel, colored with millions of hours of hard labor and soulful creation that helped make Colorado the leader in natural resources extraction, and made Denver the Queen City of the Rockies at the turn of the century,” says Wheeler.

The now estimated $350 million project will be ideally situated adjacent to RiNo, near the 38th and Blake Light Rail Station. The RTD University of Colorado A Line will be a major draw for future tenants, placing them one stop away from Denver’s Union Station and only twenty minutes from DIA.

“Denver’s RiNo neighborhood is experiencing a tremendous renaissance and rebirth. Much of the energy behind this neighborhood is the combination of new development with the old and historically important structures of which Denver Rock Drill is the finest example,“ says Wheeler.

Construction has been delayed somewhat as the project team, Saunders Development and Owners Byron, Andy and Brett Weiss, wait to secure a tenant to build-out to their specifications.

“Phase one will consist of several entertainment and retail users. There will also be approximately 70,000 square feet of adaptive re-use office. We are in negotiations with three tenants and will likely have leases signed before we have to go speculative.  But if not, we will proceed to spec that space and make it move in ready for new office users,” said Trae Rigby, vice president of Development at Saunders.

According to Wheeler, tenants in technology, entertainment, design and creative businesses are natural choices for this type of development, as well as tenants who seek a less traditional and more interesting office environment.

“The raw materials, craftmanship and 100 years of industrial patina combined with open acreage and multiple points of entry, make this project both unique and functional for contemporary mixed uses. The character of the existing structures lends itself to users who value unique, creative and inspirational environments,” states Wheeler.

Tryba Architects is currently reimagining the industrial site that will be built around a finely grained public realm of courtyards, lanes, and rail spurs. Intimate alleys activated by retail and restaurants will emulate that of Denver’s Dairy Block.

Saunders is targeting September or October 2019 to begin construction.

Renderings and video courtesy of Marcus and Millichap