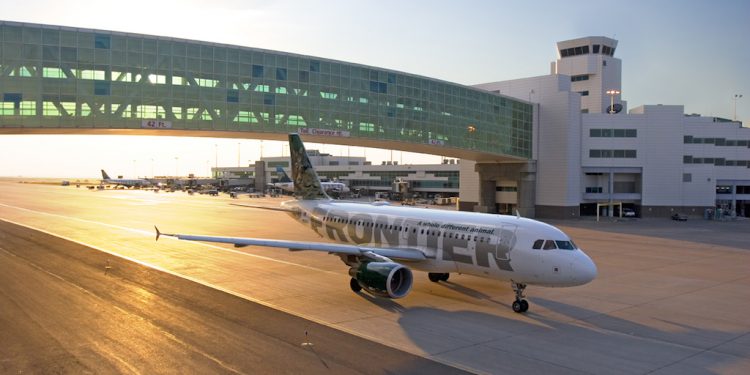 A Frontier Airlines plane passes under the Pedestrian Bridge at Denver International Airport, courtesy of DIA.

This week, the Denver International Airport (DEN), and its design team, is celebrating the 25th anniversary of the construction of its Pedestrian Bridge, one of only two of its kind that are built in the world today. The bridge, connecting the Main Terminal with Concourse A hosts a security portal on its lower deck and international customs on its upper level. Constructed in 1993 in an effort to offer a pedestrian alternative to the new airport’s inter-terminal train system, the bridge was a widely acclaimed design feat for its time.

“This free-span pedestrian bridge was incredibly sophisticated. This was the first time a passenger structure had been built large enough to allow for planes to travel underneath, and at a length of 365 feet, we designed it so two planes could pass under it side-by-side,” said Luis O. Acosta, the architect of record who led the project’s design. Built as its own freestanding structure, the 40-foot wide, 365-foot long passenger bridge was designed by LOA Architecture (previously Luis O. Acosta Architects). Other design team members included the structural engineer and prime consultant LONCO (now operating as Benesch), mechanical engineer Behrent Engineering, and electrical engineer Roos/Szynskie. The bridge was built by Denver’s Mortenson Construction. The project’s construction took less than 12 months, and as of today, it is still currently the longest free-span airport bridge in the U.S., though Seattle’s airport currently has a longer one under construction.

Not originally included in the new airport’s master plan, the bridge was added after the Main Terminal and Concourse A had already been constructed. Since the two buildings did not align at the same height, and were not designed to connect, the architects were tasked with the unique challenge of creating an arc that would be both structurally sound and visually appealing. A further challenge to the project, of course, was negotiating the project with the FAA, as they maintained restrictions that required a clearance distances from the top of the runway to the underside of the bridge, and other various technical security concerns.

Further challenges the design team had to address included creating a structure that did not allow icicles to form, which could cause damage to planes passing underneath. The structural pilings also had to solidly support the massive, two-level bridge when the underground passenger train ran directly underneath causing regular vibrations.

An all-glass curtain wall system encloses the bridge providing a panoramic view of Colorado’s diverse environments with the Rocky Mountains visible to the West and the plains to the East. The scattered glass pattern is also typically noted by those in view, though the design team acknowledges that was a last-minute aesthetic addition.

“The project was well underway when we were informed that the workers at the glass manufacturer we were working with had gone on strike,” said Tim Habben, with LOA Architecture. “The team suddenly had to design a glass pattern that would allow for the use of the glass already purchased while incorporating a new material as well from a different manufacturing firm.”

The creation of this bridge, today, has not only been lauded by those in the design and construction industries, but has also created a poignant moment of arrival for Denver’s international population, and a place that is often memorable for the airport’s millions of annual passengers both domestic and international.

“I love this bridge. I always walk it to and from Concourse A for a more peaceful transition. If there were seats, I would hang out,” shared Denver resident and DIA passenger Katherine Dunklau.

According to Brian Holland, with Mortenson Construction, “This team did a wonderful job of creating something never before built. Seeing that the project has remained virtually un-touched since its construction is a real testament to the talented team that brought this project to life.”