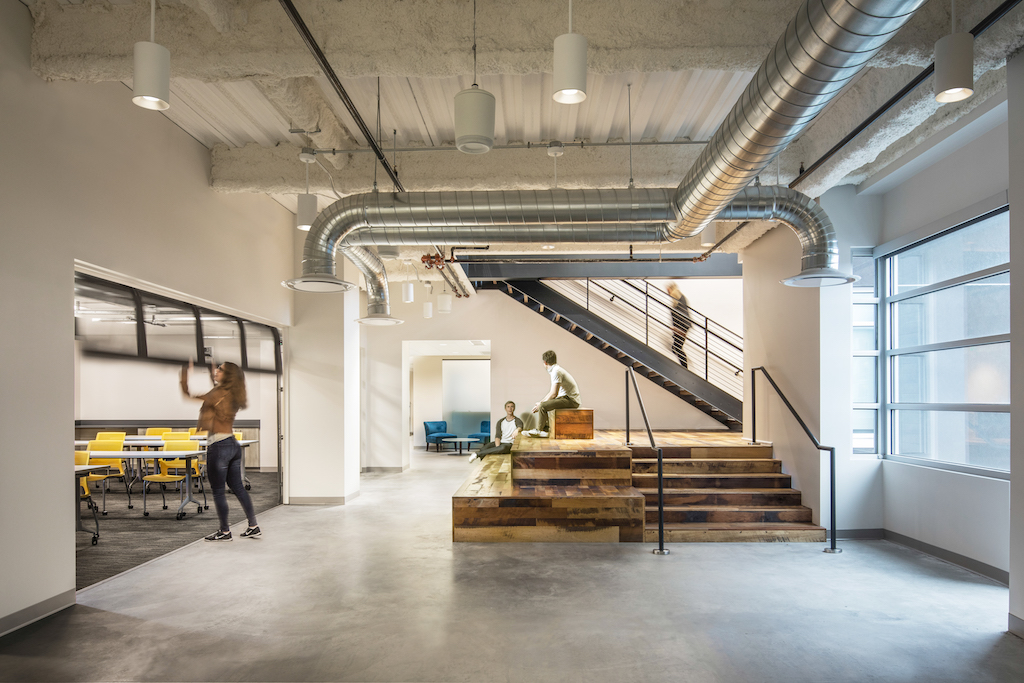 According to CBRE Research’s 2017 Colorado Tech Book report, at least 40 tech companies expanded their presence in Colorado in the past year. Downtown Denver was the epicenter of technology growth with more than 200,000 square feet of positive net absorption. Both suburban and downtown markets have gained attention from incoming or growing tech companies, looking for well-located offices with attractive amenities and cost-effectiveness. And, with many companies competing to attract and retain tech talent, the design of an office space is a key component to a companies success.

Founded as an architecture and engineering firm in 1966, today DLR Group serves clients through integrated delivery of planning, architecture, engineering, interiors, and building optimization for new construction, renovation, and adaptive reuse. Having worked with tech giants Google on their campus in Kirkland, Wash., the firm was perfectly positioned to design office space for some other prominent companies in the tech world, this time in the Denver market.

When Vertafore, an SaaS leader in modern insurance technology, was acquired by a private equity company, an infusion of capital and the consolidation of multiple field offices precipitated the need for a new headquarters in Denver. The shift in ownership came with a shift in culture for the 40-year-old company, as well as the infusion of significant new talent being brought on during design.

In keeping with DLR Group’s moto — listen, design, deliver — the firm designs to fit their clients culture. With the tech market exploding in Denver, companies are competing for the same talent and subsequently they are looking for differentiators that allow them to stand out. “We do our best to design spaces that support our clients culture and that allow them to do something a little different,” says Amy Hoffman, interior designer for DLR Group. DLR Group helped the firm’s new leadership energize around the common goals of an open-door, transparent office of the future that could serve as a recruiting tool. Many tech companies follow Agile Methodology which requires a flexible workspace but also a large open plan environment to hold regularly scheduled “all hands meetings,” as they’re called. “The millennials in the workforce now, really like that transparency, they like to hear their office agenda first hand from their leadership, rather than having it passed down through managers. So designing a space where that transparency and communication can happen is really important,” says Hoffman.

While the culture change at Vertafore was welcome, what couldn’t budge was the difficult floorplate – a single floor sectioned off as two tower plates and two terrace plates with narrow circulation pinch points between. Designing around a neighborhood concept overcomes the physical separation by encouraging employees to travel between the building sections to access coveted amenities.

The 62,000-square-foot tenant improvement is programmed to accommodate 305 employees. During design and construction, a deep partnership with the client’s real estate brokers helped to identify swing and expansion space within the building to accommodate Vertafore’s significant restructuring and hiring.

“I think we designed a space that convey’s professional but that’s also a really hip, cool place to be. It’s relaxed and urban but still a little edgy,” says Hoffman. “A lot of our clients in Denver are going for an urban chic look. They like some of that grit of the urban atmosphere combined with a sophisticated, elevated layer of design,” says Hoffman.

SpotX is an industry-leading adtech company, known for their video inventory management platform and also as a “top place to work.” Their quick growth resulted in inherited square footage and furniture, creating a medley of styles within their work environment.

Now located in the Arista building in Broomfield, SpotX occupies the entire third and fourth floors. DLR Group’s design creates an open office environment, with lots of collaboration, whiteboarding space, and conference rooms of all sizes for teams to sit together and interact.

Spaces that incorporate amenities that build camaraderie and where employees can work in alternative spaces to their desk, is a common goal of many tech companies. “Spaces designed around an amenity, where you can get a smoothie and still be on your conference call, is definitely more appealing to the typical tech employee right now,” says Hoffman. The plethora of work settings and casual nature of the company gives SpotX employees the option of where to work depending on their task. At the heart of the design is an internal open staircase that allows circulation to occur between the two floors and the various amenities spaces. To accommodate larger gatherings the bottom of the stairs extends to a raised plinth area with bleacher style seating, which connects to a flexible large meeting / training space accessed through an oversized garage door. There is a game area, training room, and bar on the third level, and breakroom, large gathering table, and several conference rooms on the fourth.

The 38,730-square-foot space needed to accommodate 260 employees and have the flexibility to include more as the company continues to grow. Garage doors rather than folding partitions were chosen to keep a casual touch to the tech company’s new space. Wood was added to provide warmth to the amenity areas, and the lack of ceilings within the office space help maximize height. K13 acoustics were implemented to help cut down on noise within the open layout. DLR Group provided architecture, engineering, and interior design services.

Ping Identity, a fast-growing technology company focused on identity defined security with IDaaS and SaaS products, was preparing for acquisition. DLR Group had designed their offices on the first floor of a lower downtown Denver building in 2011. To project a stronger image to potential buyers, the company decided to expand to the eighth floor of the same building, using the 11th floor as temporary swing space.

DLR Group’s design used this opportunity to apply lessons learned from the original first floor design, adapting and modifying for this specific business unit. While Business Development and Admin remain on the first floor, the 11th floor is the domain of Engineering & Creative. The swing space allowed DLR Group to design and pilot a new collaborative desking arrangement, which ultimately was selected for rollout. Team Hubs of four to six desks are arranged with a communal table in the middle for easily accessible team huddles. With Creative on one side of the office and Engineering on the other, the seam is occupied by the Design Center, which brings the two business units together with interactive amenities. “A collaborative space was really the driver as well as an “all hands” area for larger meetings and training,” said Audrey Koehn, interior designer at DLR Group. “Because Ping already had an established community it was more about making sure we connected the community between the first and eighth floor plates,” says Koehn. “Creating a place where people could be comfortable all hours of the day and creating a collaborative space was top priority for Ping, as well as making sure there was a lot of choice in how they work and where they work.”

As designers, we have to get to know our clients, their employees and design a space that is custom to their needs, explains Hoffman. “We’ll create a magnet to attract new talent and keep the great talent that they already have coming into the office,” says Hoffman. “Whether it’s the great technology, the space that’s exactly what employees need to do the task at hand – we have to create a draw to get employees to want to make the effort to come into the office…and not prefer to work at Starbucks.”