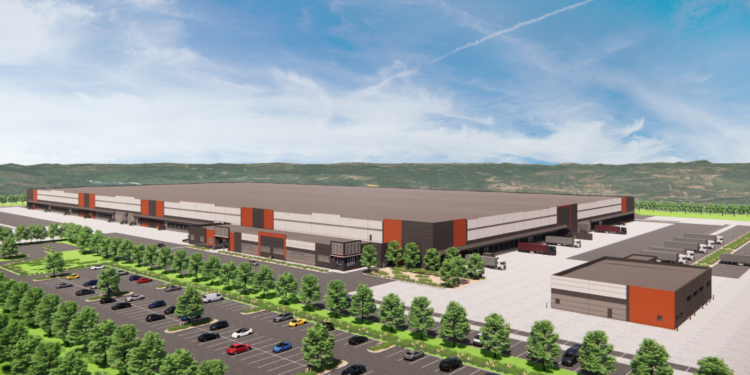 CBRE has announced the sale of 75 acres at HighPoint Elevated industrial and logistics park in Aurora, to Dollar General. The park’s development team, Hyde Development and Mortenson, will build a 919,000-square-foot Class A distribution facility for Dollar General on the site.

“We are thrilled that Dollar General has selected HighPoint as its new home. The new Dollar General building will anchor the east side of the HighPoint development and is already generating new leasing activity. The combination of labor, easy access to E-470, and the in-place infrastructure has attracted Dollar General and other users to this unique site,” said Paul Hyde, principal at Hyde Development. Hyde Development ranked as the top commercial real estate developer in Denver last year, developing nearly 1.1 million sq. ft. across the metro area in 2021.

The Dollar General project is the first build-to-suit commissioned at HighPoint Elevated, which broke ground last year and will include up to 5.5 million sq. ft. of industrial and logistics space at full build-out. Multiple deals are currently signed or under contract at the park.

“The deal with Dollar General is a perfect example of our expansive build-to-suit capabilities here at HighPoint,” said Brian Fitzpatrick, vice president and general manager at Mortenson. “Speed to market has never been more valuable and we are able to provide that advantage as both the developer and design-builder on the park.”

Dollar General announced the project as part of a three distribution center expansion in Arkansas, Colorado and Oregon. The company said it plans to invest $172 million into the facility in Aurora, which will create around 400 new jobs at full capacity. The expansion comes as inflation is driving some shoppers toward more affordable options for their daily needs. According to analytics firm InMarket, average spending on grocery products at discount chains increased 71 percent from October 2021 to June 2022. Construction is scheduled to begin this summer on the Dollar General facility at HighPoint and complete in late 2023.

“Tenants appreciate that HighPoint provides regional access to both labor and customers. Its central location makes it a strategic fit for companies looking to distribute their goods across northern and southern Colorado,” said Daniel Close, first vice president, CBRE. “HighPoint is one of only a handful of developments in metro Denver that can accommodate industrial needs from 20,000 sq. ft. to a mega distribution facility. This is important as demand for industrial spaces nearing or surpassing 1 million sq. ft. has skyrocketed, spurred by rising e-commerce sales and a shift in retail inventory strategy.”

Last year was a record year for large warehouse transactions, according to CBRE research. Companies committed to 57 warehouse leases of 1 million-sq.-ft. or larger across the U.S. in 2021, a 19% increase from 2020. The general retail/wholesale sector led in number of large leases, followed by e-commerce-only occupiers and food and beverage companies.

HighPoint Elevated is located at the southeast corner of East 64th Ave. and E-470, six minutes from Denver International Airport. Building 1 is under construction now and scheduled to be completed this summer. The 37%-leased speculative building totals 542,000 sq. ft. with 340,588 sq. ft. remaining available. The building is divisible to 170,294 sq. ft. with 36-ft. clear heights, 50-by-54-ft. column spacing, an ESFR sprinkler system, dock-high and drive-in loading, and trailer parking. Additional buildings will range from 64,000 sq. ft. to 1 million sq. ft. with at least one building slated for cold storage. Outdoor storage is available at several sites throughout the park.

Retail space will run through the middle of HighPoint Elevated, along East 64th Avenue, providing walkable retail options for tenants and visitors with outdoor seating areas. Infrastructure improvements are underway to widen East 64th Avenue to four lanes at the park (six lanes west of E-470) and to add a full interchange at East 64th and E-470, giving tenants the option to bypass I-70 to reach the metro’s northern and southern suburbs.

HighPoint is a 20-minute drive from downtown Denver and is situated within three economic benefit zones: a federal opportunity zone, an Adams County Enterprise Zone and a Limon Foreign Trade Zone.