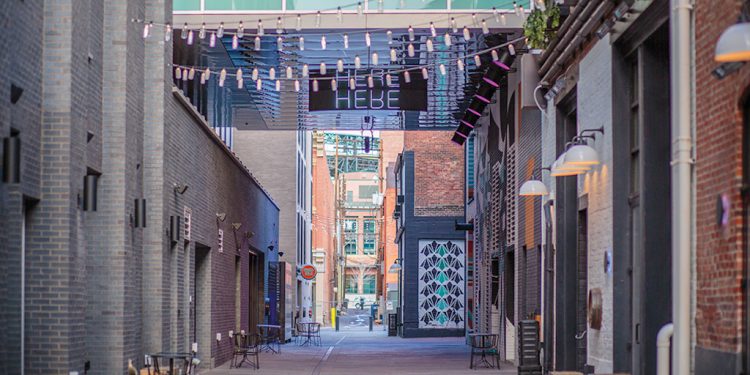 Dairy Block is one of six Downtown Denver projects to be awarded.

The honorees, selected by a jury of key business leaders convened by the Downtown Denver Partnership, are businesses, projects, and initiatives that had the most significant economic impact on the center city in 2018. The winners were showcased at an event  attended by nearly 1,000 business and civic leaders with videos produced by Comcast and Westworks Studios.

The 2018 Downtown Denver Award Winners are:

1144 Fifteenth Street is a modern addition to Denver’s rapidly-changing skyline. At 603 feet, it’s downtown’s tallest commercial office building in 35 years. The distinctive 42-story skyscraper was completed in 2018 and is already 84 percent leased, keeping businesses in the commercial core, and bringing in new ones.

The stunning design of Riverview at 1700 Platte Street elevates this core downtown neighborhood, while enhancing the pedestrian experience and connections to the South Platte River and downtown.

The project’s central tenant is BP, that relocated its Lower 48 headquarters from Houston, bringing hundreds of permanent jobs to Denver.

Civic Center Station impacts thousands of people every week, creating a safer, more welcoming bookend at the heart of Downtown Denver. As the southern anchor for the 16th Street Mall, it’s a vital access point for the Downtown core for the thousands of commuters, residents, and tourist who pass through it each week.

Dairy Block is a “micro-district” in the heart of Denver’s historic Lower Downtown District. The mixed-use office, retail, and hospitality project is a catalytic addition to downtown, perfectly situated to cater to downtown visitors, residents, and workers.

In 2018, after 14 years of deal making by several local developers, Gart Properties brought Target to the 16th Street Mall, completing downtown’s ecosystem with easy access to groceries, home goods, and more. As one of the nation’s largest and most sought-after retailers, Target’s choice of location is a resounding confirmation of downtown’s booming reputation.

The Lydian | Video
The Lydian elevates Five Points’ neighborhood amenities, while preserving the legacy of the area. The Lydian is socially and economically inclusive, offering 22 units of affordable housing. Retail spills into the lobby, designed to be a public gathering space. On the ground floor, a yoga studio, a bar and restaurant, and a market, make this a vibrant center for the neighborhood.

To learn more about the Downtown Denver Awards, click here.

Setting Sustainable Goals: A Guide for Architecture and Design Firms