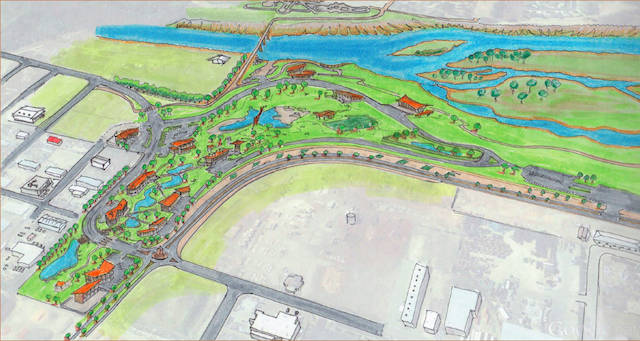 Earlier this month, CEOs, Colorado government officials, executive directors, entrepreneurs, students, and leaders from across the state that represent different cross-sections of the outdoor economy in Colorado, gathered at the Colorado Outdoor Industry Leadership Summit (COILS) in Grand Junction. While there, visitors to the western slope city were greeted with the unveiling of a new website and promotional kit as the region ploughs ahead on a major new home base for the industry, dubbed the ‘Riverfront at Las Colonias Park’ project.

The $30 million business park and recreational development –a concerted effort by multiple public and private partners – is just one step the city is making to brand Grand Junction as the number one destination for outdoor recreation businesses in the state. Dubbing itself as the “Outdoor Capital of Colorado” thanks to its diverse ecological assets and environments, its central location between the urban hubs of Salt Lake City and Denver, and its high caliber transit access for manufacturing and distribution, the region is on a mission to capitalize on the industry’s clear momentum.

“We have our own airport. We’re a four-hour drive from Salt Lake City, four hours from Denver, and within a two-hour drive from literally hundreds of outdoor recreation destinations.” said Steve Jozefczyk, business development manager for the Grand Junction Economic Partnership.

The “Riverfront at Las Colonias Park” development was announced earlier this year but has just begun infrastructure construction on its 15-acre site, alongside the Colorado River in downtown Grand Junction. Created in response to an effort to keep industry power player Bonsai Design, and to grow the region’s economy, the site will host the headquarters for Bonsai and is actively seeking additional headquarters facilities. The unique element for this business park, when compared with hundreds across the State, will be the planned outdoor amenities incorporated directly adjacent to the companies who utilize them. From the creation of a lake to access for water sports brands, to active, usable climbing walls, volleyball courts, bike tracks, ropes courses, and campsites, the campus is designed to serve as more than an office park or manufacturing site, but also a unique testing ground for those products and services offered in the industry. Almost all amenities will also be open to the public, which aided in the project’s receiving of City and State incentives.

The city will invest $10 million in the business park’s development, with help from the Downtown Development Authority, and $20 million will be contributed from private investments.  The business park keeps key elements of the master plan for Grand Junction’s Las Colonias Park in place, including trails, a dog park and a riverfront amphitheater, which has opened to the public this summer. All buildings, both provided and those built-to-suit, will require a high level of sustainable design in alignment with the Park’s original master plan.

The design also includes a “flagship course” for Bonsai to showcase its offerings to potential clients, including a zip line that will stretch from Eagle Rim Park across the Colorado River to Las Colonias, the only water-crossing line of its kind in Colorado. A suspension bridge across water features on the business park’s campus is also planned. Bonsai’s building will also be built larger than initially needed, in an effort to act as a “starter space” for other companies launching into the outdoor manufacturing industry.

Grand Junction, with a population of just over 60,000 people, has had a mixed reputation in recent years. Though some consider it a location simply convenient for refueling, the Grand Junction area has also developed into a major mountain biking destination, with many bikers coming from the Front Range of Colorado, the Salt Lake City area, and as far away as California to enjoy the area’s abundant single-track trails.  As the largest city in western Colorado, and given the explosive growth of the Front Range, the area is considered by many to be a natural destination for Colorado’s further growth.

The partners in the business park’s development include the City of Grand Junction, the Downtown Development Authority, the Grand Junction Economic Partnership and Bonsai Design. To learn more about the project head to www.riverfrontcolorado.com.