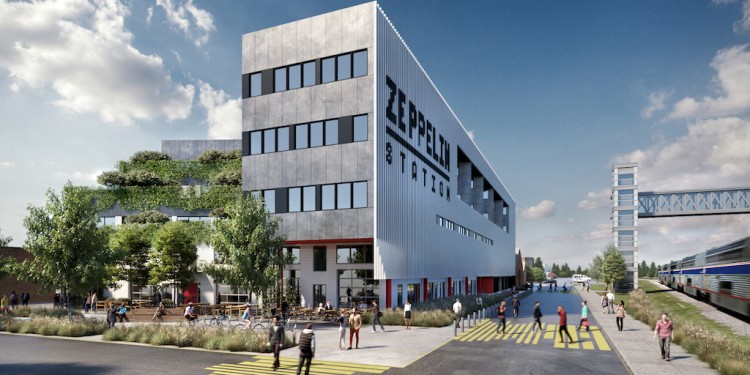 DENVER – On Monday, March 12, Zeppelin Station — the creative workplace and market hall located at the 38th and Blake Station of the RTD commuter rail line in Denver’s RiNo neighborhood — will open its doors to the general public.

The final culinary tenant at Zeppelin Station will be called “No Vacancy,” featuring a rotating lineup of local, national and international restaurant talent that will occupy the front-and-center space, each for a 60 – 90 day stint.

The first guest to stay in No Vacancy will be Comal, the beloved, heritage food incubator in partnership with non-profit Focus Points Family Resource Center, where female entrepreneurs from the Globeville and Elyria-Swansea districts cook and serve the Mexican, El Salvadorian, Syrian, and Ethiopian foods that they grew up eating, while honing their culinary and business skills. Zeppelin Station will be the second, albeit temporary, outpost of Comal which calls the Taxi Development its permanent home. Dedicated to serving best-of food and drink offerings prepared by respected chefs and local artisans, the eight stalls and two bars at Zeppelin Station will be open daily serving morning coffee and breakfast-on-the-go, mid-day lunch, afternoon pick-me-ups, happy hour, dinner, cocktails and late night eats. A full-service anchor restaurant, separate from the food stalls, will be revealed in the summer of 2018.

The market hall will be the new home of the RiNo Arts District and the organization’s affiliated retail shop, showcasing not-found-elsewhere pieces created by local artists.

“When we originally envisioned Zeppelin Station, we imagined a day and night destination where you’d find the most sought-after food and drinks in the city,” said Justin Anderson, director of hospitality development for Zeppelin Development. “Over the past year, we’ve assembled a lineup of highly-regarded, independent operators who will showcase their very best dishes in an environment that encourages diners to personally experience the dishes being prepared through smell, sight and sound.”

Designed by award-winning Dynia Architects, Zeppelin Station is on track for LEED certification and features indoor-outdoor open spaces, high ceilings, natural light and native plantings in the exterior landscapes. Above the market hall, three floors of office suites offer roll-up garage doors that provide access onto green roof terraces overlooking the Denver skyline and Rocky Mountains. Companies that will reside at Zeppelin Station include Beatport, Brandfolder and Love Your Hood, among others.

“Denverites are seeking similar amenities in their workplace that they have at home: well-designed spaces, ready access to fresh air, great views and natural light in a location that’s easily accessible by foot, bike and transit. Having a one-of-a-kind food hall experience on the ground floor is the ultimate amenity,” said Kyle Zeppelin, president of Zeppelin Development.