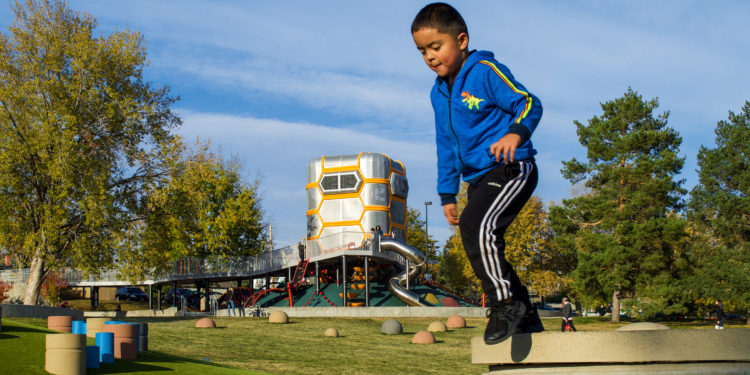 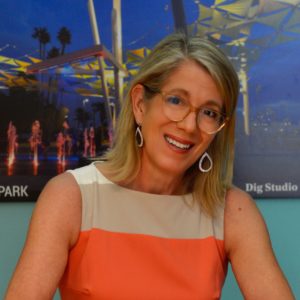 A national competition sponsored by Denver Parks and Recreation (DPR) in 2012 invited the design community to “re-imagine play” and help radically transform Denver’s playgrounds. By liberating play equipment from typical defined bubbles of space and spreading play opportunities throughout park environments, people of all ages and abilities are encouraged “to get off their seats and on their feet” to reap the health benefits of movement through play. This initial design competition format did not incorporate outreach and community input, resulting in the winning “City Loop” entry being rejected by neighborhood constituents. Not to be dissuaded, DPR sought another site to apply their vision for reimagining play. Their Game Plan for a Healthy City aims to ensure equity in the distribution of parks and park resources, leading the city to reinvest in Paco Sanchez Park due to its location in a west Denver neighborhood with very low equity and health scores. This time, when the design process commenced, DPR and their consultants made sure the community was engaged from the start.

Paco Sanchez Park is a compelling example of how a strong community engagement process can positively affect design results. From the outset, the focus was on engaging all generations of people in play, to encourage physical activity and movement and improve social physical and emotional health through intentional design.

Prior to design, a grant from the Colorado Health Foundation documented how people used the park and the amount of time they spent recreating. The study included 74 direct observations over a period of 16 months, and included demographic information, and the level and type of activities of those visiting the park. It was clear at the end of the study that only 3.5 percent of park occupants were playing. The challenge became how to redesign the environment to change increase activity. The first steps included meeting with the public in a variety of compelling ways to draw out what mattered most to them.

The design team and DPR identified a group of stakeholders and met regularly in several different venues to maximize attendance, including the local library, a nearby school, and at Girl’s Inc, a non-profit near the park. A combination of factors contributed to successfully gathering input. The enthusiastic support of community leaders, including venerable longtime residents, councilman Paul Lopez, and other community leaders was fortuitous and important in gaining trust and buy-in. To generate interest, a large community tailgate party was held in the park, replete with the essential ingredients to draw a crowd: Food, music, and raffles with prizes including tickets to see the Broncos.

Information stations set throughout the park displayed ideas that people could vote on and team members listened carefully to the community’s desires. After compiling and analyzing the information, many ideas surfaced that otherwise might not have been considered.

The completed project incorporates all of the highest ranked features and activities. Most important were:

Specific feature requests included a place for concerts and movies, basketball, skateboarding and an opportunity to ice skate.

To manifest these desires, a small kiosk building and plaza were added to the program. The plaza is scaled for gatherings and programmed events with room to spill into the nearby parking area for larger crowds. The kiosk building will serve as a mini-recreation center, enabling park users to check out a variety of play equipment free-of-charge. To recognize the park’s namesake, Paco Sanchez, Denver’s first Spanish-language radio personality and an important community leader, the design team chose to reflect his Latin culture in colors, textures and patterns. His ability to reach and connect to the community was manifested through the design theme of broadcasting. Play elements such as the Microphone Tower, Gramophone Slide and Folklorico Play Pod reflect and interpret the broadcasting theme within all the park’s play loop features. At the center of the play loop, a music bowl and record stage honoring Paco serves as an outdoor venue for concerts and movies. And a skate park and basketball court with removable posts will accommodate skating during winter months.

Without the community’s input the design of the park likely would have been far different. Engaging the community and incorporating their input as well as pursuing diversity, equity and inclusion ideas led to a design that was embraced and supported by the community and subsequently welcomed with universal support since its opening. The improvements incorporated the “play loop” concept linking play pods, sports fields, plaza, and new kiosk building, while fully realizing DPR’s vision and the community’s input, transforming the play experience for all. A follow up study by the Colorado Health Foundation will measure how well the goal of getting people in the park to move and play actively has been met.

The opening of the Phase II improvements culminates an eight-year journey for Dig Studio on the park. We appreciate the efforts of the owner and the entire team, which includes Port Urbanism, Barker Rinker Seacat Architecture, Martin/Martin Consulting Engineers, and Landscape Structures Inc., among many others who contributed.

Construction was led by PCL Construction, whose work on the park was recently honored by Colorado’s Association of General Contractors with a 2020 ACE Award.

Laurel Raines is a founding principal and landscape architect at Dig Studio, and brings exceptional craft in site planning and physical design to projects of all scales and complexities. The power of the design process captivates Laurel and enables her to combine the client’s needs with the site’s unique characteristics to build beautiful, functional, and environmentally conscious places.