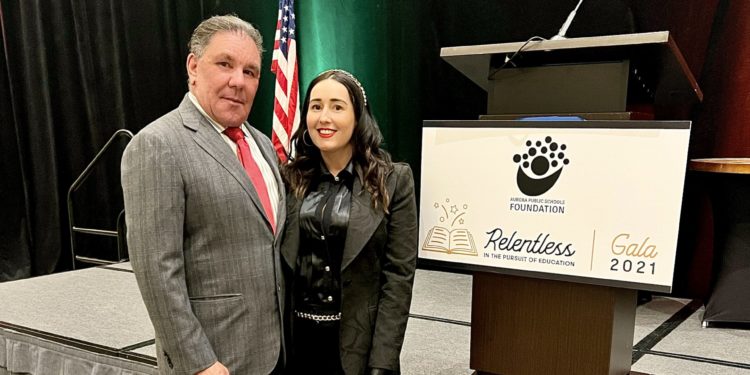 It was quite a surprise Tuesday evening when Carlo Ferreira, developer of The Aurora Highlands, donated $100,000 during the Aurora Public Schools (APS) Foundation 9th annual Relentless Gala. Ferreira surprised everyone, including his daughter Carla, the director of Onsite Development of The Aurora Highlands, with his generous donation. During the $1000 paddle raise portion of the fundraiser, Mr. Ferreira held up his paddle and said, “$100,000 from The Aurora Highlands.” Emcee Simone Ross’s jaw dropped and the crowd observed the moment with a standing ovation and a hug from his daughter, the first college graduate in her family.

Mr. Ferreira’s donation brought the total to $390,000 raised at the gala to benefit the College and Career Centers in Aurora Public High Schools, which help APS students with college preparation, military enlistment or career exploration. Mr. Ferreira comes from a family who could not afford college and instead, at 17 he enlisted in the Marines before receiving his diploma. He understands that many APS families do not plan for college because of financial or cultural obstacles and felt compelled to support the funding of the school district’s College and Career Centers so APS students can have more opportunities.

Additionally, with a donation of $35,000, The Aurora Highlands was the title sponsor of the evening. The event took place at the Hyatt Regency Aurora Denver Conference Center and was attended by Aurora’s community leaders including council people, school officials and local businesses representatives.

Prior to this latest donation, The Aurora Highlands had donated nearly $200,000 to Aurora Public Schools.

The Aurora Highlands will expand the metro area to the east near DIA and will add 12,500 homes and four new schools to Aurora Public Schools, the first of which will break ground in 2022 and open in 2023.