YOU ARE HERE:Home » Architecture » Luxury Apartments on Speer Appeal to Live/Work Tenants
ArchitectureDevelopmentFeatureMultifamilyOffice 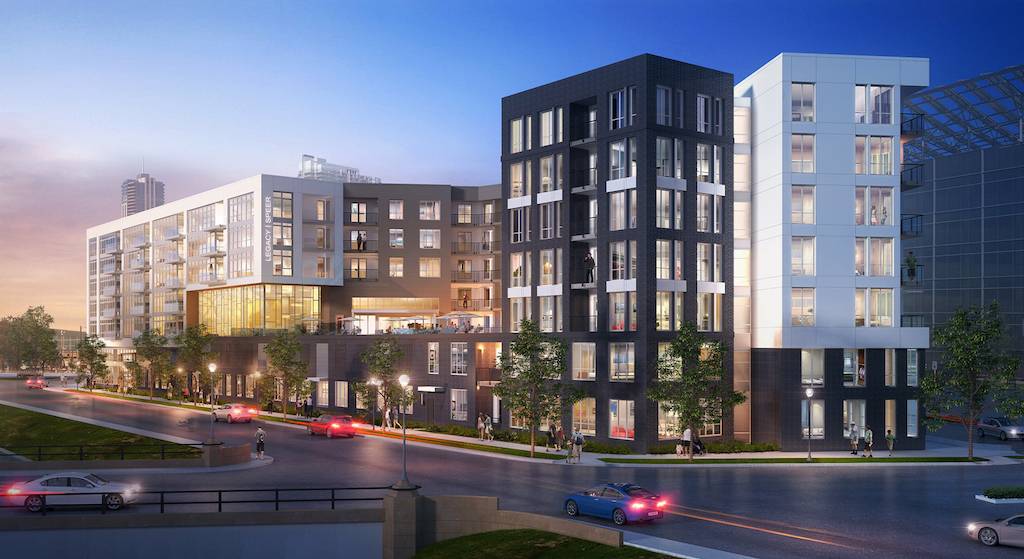 DENVER — KTGY Architecture + Planning, an international award-winning architecture firm, recently revealed details behind the design of TriVista on Speer, a 322-unit luxury apartment building currently under construction on Speer Boulevard between 13th and 14th Streets. The seven-story community, adjacent to Denver’s Golden Triangle neighborhood, is slated for delivery in 2019 and targets a growing trend toward flexible live/work residences.

One of TriVista’s most defining features is its central location at the edge of the Golden Triangle, a neighborhood bounded by Speer Boulevard, Colfax Avenue and Lincoln Street, an evolving eclectic neighborhood known for its strong cultural influence of art galleries and museums. The project is expected to attract more people to the neighborhood, further solidifying the Golden Triangle as a home for design-savvy Denverites.

“This site has urban context and local history on all sides,” said Terry Willis, principal at KTGY’s Denver office. “The Golden Triangle is quickly becoming a more vital neighborhood with an attractive mix of residential and commercial uses. We designed TriVista on Speer to sensitively fill a gap in the city’s urban fabric while setting a high standard for multifamily living in the city.”

KTGY, along with developers Legacy Partners and USAA Real Estate Company, envisions TriVista as a dynamic gateway to Denver’s Golden Triangle and the Civic Center district. To achieve that goal, KTGY leveraged the firm’s experience in multifamily design to create a community that reflects the Golden Triangle’s rich cultural history.

TriVista sits on a 96,000-square-foot triangular parcel whose shape mirrors the boundaries of the Golden Triangle itself. Given the large floor plate, it was crucial to break up the building’s mass and create architectural elements with their own character. By designing each side of the building to respond to the different frontages, each facade presents a unique design language. Visually, TriVista’s brick base unites the different components of the building.

“Denver is historically a brick town and so approximately 30 to 40 percent of the facade is of a masonry nature,” said Nathan Scairra, associate principal at KTGY.

The western facade of the building, running parallel to Speer, responds to views of Cherry Creek and the Rocky Mountains and was dubbed the “View Houses.” With expansive floor-to-ceiling windows and a large amenity deck, this side maximizes connections to Colorado’s outdoor landscape. The northwest corner element is white, to enhance its positioning as a distinct gateway, echoing the white civic buildings to the east. The north side of the building, facing downtown and leading to Civic Center Park, has a more formal language. Called the “City Houses,” it reads like a row of townhouses, each with its own front stoop and private entrance.

Along Fox Street, the eastern elevation became known as the “Art Houses” and reflects the creative spirit of the galleries, museums and music venues throughout the Golden Triangle. Its playfully articulated facade faces the Denver Art Museum, Clyfford Still Museum, History Colorado Center and Kirkland Museum of Fine & Decorative Art, with rhythmic architectural elements interrupted by an eye-catching composition of materials, colors and textures.

As part of a larger trend toward flexible live/work residences, the townhouse-inspired north façade of TriVista includes four ground-floor, storefront-style live/work units will offer a street side presence. Outside, the placement of these residences does double-duty as a creative ‘wrap’ around the parking at ground level while providing an integrated, commercial feel.

“To address the needs of the community for commercial space we designed a live/work two-story unit that you could truly operate a small business out of,” said Scairra.

Each 1,490-square-foot space is split into two levels: a fully open first floor with a half bath – ideal for a home-based business – and a second-level living quarters with one bedroom and one bath. The units feature sidewalk access, maximizing visibility and accessibility. Residents also have the option to install window signage to promote their business and draw in foot traffic.

Street-level units accessed by front stoops provide a neighborly feel at a pedestrian scale. This is further expressed by wrapping the two-level podium with a brick base that nods to the vernacular architecture of Denver, a predominantly brick city until the 1950s.

In addition to the ground floor units, the 5th floor of the building is designed to be a social working space that will include a series of offices. Sciarra believes the bigger trend right now is working remotely and thus incorporating the co-working culture into a residential environment.

KTGY provided a simple solution to a complex challenge created by the site’s proximity to Cherry Creek. Rather than specify a below-grade parking option – one that would require an extensive dewatering system and would have significantly lengthened the construction timeline and cost – the team designed the parking garage at the center of the building and wrapped residences around the outside border of that space.

Meanwhile, the wood-frame design helped achieve an economy of construction for the developers. During the development phase, KTGY had the foresight to obtain permission for the two-story, above-grade podium from the city of Denver prior to the adoption of the 2015 International Building Code, which allows podium buildings to have more than one level of podium structure below the podium deck.

KTGY focused efforts to zero in on the right mix of apartment sizes – ranging from 590 to 1,820-square-feet – and interactive amenity options.

“I think we are starting to see a trend towards larger unit deliveries in multifamily. What’s really unique about Trivista on Speer is we have units as big 1,700-square-feet,” said Sciarra.

On the third-floor pool deck overlooking Speer, KTGY’s designers included a collapsible glass panel wall from the pool area to the adjacent lounge and test kitchen, to create an open area and free flow between the spaces. The community kitchen – with private dining and lounge space – was configured to accommodate an expansive S-shaped countertop/prep area so caterers and residents can easily set up for large gatherings and community events.

Looking to maximize the square footage of the pool deck, KTGY programmed an adjacent stair tower leading down to the ground level to serve as an extra emergency exit. The planning behind the pool deck – which includes a pool, hot tub, fire pit and grilling stations – as well as the cafe-style common workspace is meant to foster a sense of community and encourage serendipitous encounters.

A 500-square-foot bike/ski maintenance area with workbenches and tools serves as more than simply a place to tune up equipment. The open space provides yet another opportunity for residents to socialize as they maintain their gear. Parking for 162 bicycles will be included in the building’s garage, adjacent to the equipment maintenance area.

KTGY are also working on the mixed-use development Central Park Station in Stapleton.