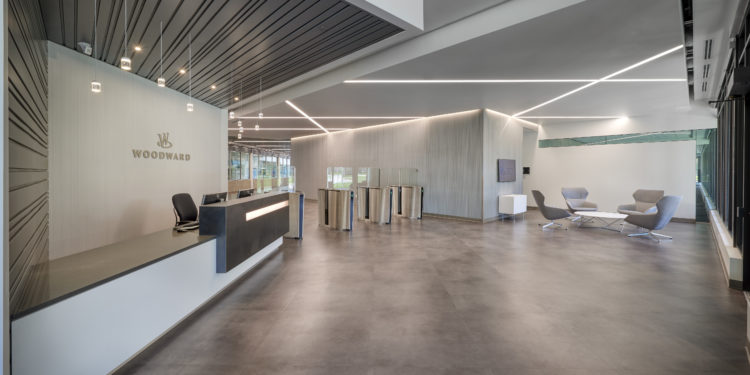 This past week, the Design-Build Institute of America (DBIA) awarded the Woodward Drake project in Fort Collins, validating the project’s success with the National Award of Excellence in Rehabilitation, Renovation and/or Restoration, the highest honor in the category. Woodward, a designer, manufacturer, and service provider of control solutions for the aerospace and industrial markets, retrofitted the outdated and unloved 50-year-old campus, a manufacturing and office facility, with new building systems and infrastructure as well as a design that better reflected the company’s vision.

Led by Mortenson, with MOA Architecture providing design, the resulting renovation, completed in 2016, was deemed a resounding success by all involved. The tightly-knit design/build team pursued a highly collaborative project approach that delivered a stunning final space for the client, fulfilling Woodward’s hopes for this key facility.

Jason Mills, Colorado facilities director for Woodward, was on hand in Las Vegas to accept the award on behalf of the team. He was joined by members from the Mortenson and MOA team, including MOA’s Director of Science + Technology Brian Konczak and Senior Project Manager Paul Gibson.

“We are honored and thrilled to be recognized by the DBIA,” said Konczak. “Not only was the outcome successful at the end of the job, but the process was great. The owner, design team, and construction team worked seamlessly together as one collaborative team from kick-off to close-out.  Everyone contributed their part, and then some. It’s the type of project, and project team, that you reflect on and look to replicate for future projects. Being recognized by the DBIA is icing on the cake!”

Previously the winner of the DBIA Rocky Mountain Design-Build Award in the Rehabilitation, Renovation and/or Restoration category, the project had already been selected as one out of three National Merit Awards recipients in the category by DBIA. This recognition elevated the project one final step above the competition. The project marks MOA’s second design/build project recognized by the DBIA Rocky Mountain chapter, which awarded the Bioscience 2 building on the Fitzsimons Innovation Campus with an Award in the Award for Industrial, Process and Research Facilities category in 2015.