YOU ARE HERE:Home » Architecture » Transformation of a 1938 Building Brings the Farm to the Urban Table
ArchitectureDesignDevelopmentFeatureHospitalityRenovationRetail

The renovation taking place at 2401 Larimer St. is not your average office or retail conversion. And the business going into the property is not your average tech startup. When it’s complete next year, this quirky 1938 building, often overlooked by passersby, will become a high-tech hydroponic farm that will sell freshly grown produce directly to consumers through an on-site market and restaurant concept called Farm & Market.

Breedlove Capital, the family-owned investment firm funding the startup, knows there may have been easier buildings and locations in which to launch the flagship Farm & Market concept, but the transformation at this location was about seeing a need and recognizing potential.

“This location was essentially a donut hole in the urban fabric at the gateway to the Ballpark and Five Points neighborhoods,” said Breedlove Capital Co-Founder Stephanie Breedlove. “We saw an opportunity to bring in a concept that would directly address needs in an area that has long been a produce desert. This area of the city is growing rapidly. You have thousands of people living within a six-block radius and few options for fresh produce. Farm & Market will put residents within walking distance of a working farm.”

Breedlove Capital engaged OZ Architecture in April to help them reimagine the property while retaining its historic footprint and character. The 6,135-square-foot building was, at one time in its history, the home of the Colorado Potato Grower’s Exchange.

“In this sense, we’re actually returning the building to its roots,” said Breedlove. 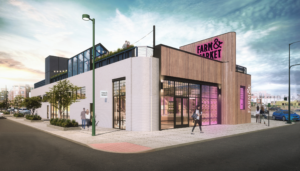 The design team at OZ first looked at context. While the building is humble in its presence, it is located at a prominent position in the neighborhood at the intersection of Larimer Street and Broadway. Thousands of cars pass this location each day, presenting an opportunity to not only invite pedestrians into the food-growing process but to provide a view into the farm for passing drivers.

To draw the eye and increase visibility, the design team leaned into some of the funkier design elements of the building – the large fin jutting up from the building and its unusual, rounded corners, for example – while working to streamline the complicated nature of the building’s design. The fin will become a focal point in the new design, with cladding in new materials intended to add a sense of warmth. A strong retail presence was re-established with a front door and new glazing along Larimer. High bay windows will retain their proportions, but the design takes them down to the ground level to offer a new level of transparency.

Midway through the design, the client and architecture team realized the opportunity present in the rooftop space. The design was augmented to include rooftop access, providing market-goers during the day with an opportunity to enjoy a picnic facing Denver’s skyline. At night, the space will be made available to the community for event rentals.

“We wanted this space to truly feel like it was a neighborhood asset,” Breedlove added. “This area has plenty of rooftop bars. We envision this as more of a gathering place for the community across demographics.” 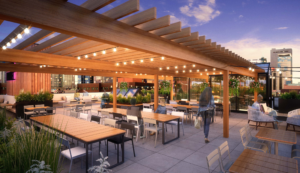 Inside, the challenge of transforming the neglected structure into a working hydroponic farm will be no small feat. Similar urban hydroponic farms exist around the country, but Breedlove notes that they are typically sealed off from the public – and with good reason. Hydroponic growing has very specific requirements within a controlled agricultural environment. Maintaining those conditions year-round in a colder climate like Denver’s is a major undertaking. It would have been easier for the design to close the farm off to the public. However, part of Breedlove Capital’s vision was to bring the community into the process, making it visible from seed to harvest. The team saw this as an educational opportunity as well as a business endeavor.

Creating this high level of visibility while supporting the tightly controlled environment required for a vertical hydroponic farm to thrive – all within an 83-year-old building that lacked virtually all meaningful insulation – was the biggest hurdle for OZ and the MEP team at BG Buildingworks.

The equipment being used in this farm is some of the most advanced on the market. The design had to not only bring the building up to code and add the necessary insulation but take it to the next level and create an advanced cockpit-controlled environment within the farm as well as a separate, welcoming retail environment.

“We understood this project would require significant capital expenditure, but our goal in working with OZ is to create the template for success for future operations of this kind,” said Breedlove.

The design team at OZ created the desired transparency on two sides of the farm, at the front and on the interior, running lengthwise. Special consideration was given to the properties of the glass specified to minimize the potential for breakage as any breach of outside air could quickly ruin the crop and set the farm back weeks. 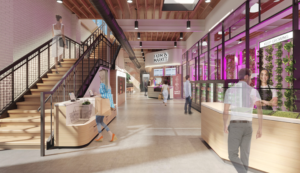 The design leans into the high-tech nature of the farm, celebrating the pink light nurturing plants 16-18 hours of the day.

The design team also had to consider the process of getting the daily harvest of various lettuce and microgreens from the controlled farm environment and directly into the hands of consumers or chefs at the restaurant on site.  A playful, full-glass wall is designed to functionally separate the Farm from the Market, but clever operable openings allow for day-of harvested produce to be directly in the hands of consumers.

“Making this farm consumer-facing requires such thoughtful methodologies and design considerations,” said Breedlove. “The result will be that this small, 3,000-square-foot farm, will hopefully be able to produce between 75,000-100,000 pounds of food for this community each year.”

The project is currently with the City of Denver for permitting, and Breedlove Capital estimates Farm & Market will open for business in Q3 2022.