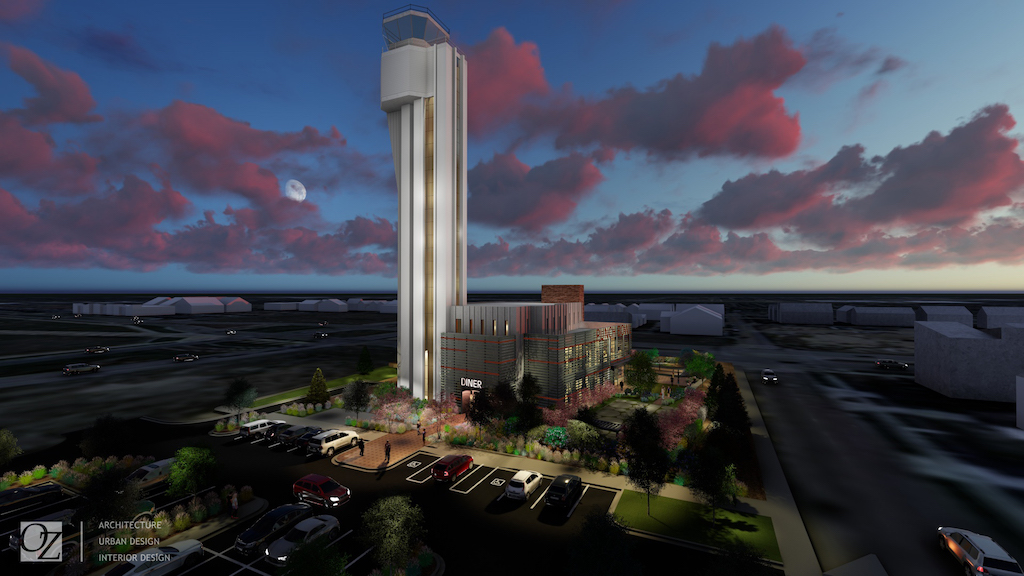 DENVER — Construction of Denver’s second Punch Bowl Social — a growing chain of experiential restaurants, complete with table and arcade games, karaoke and bowling — is so close to completion that you can practically smell the southern fried chicken cooking in the open concept kitchen. Approximately a month away from its grand opening, Forest City Enterprises, Inc and R&M Parker — the general contractor for the project —  are hard at work transforming the former Stapleton air traffic control tower.

“The Denver City Council came to us because we have a reputation for preserving and repurposing buildings the right way and there were also efforts from outside parties to tear the building down and we didn’t want to let that happen,” said Robert Thompson, founder and president of Punch Bowl Social. “From the commercial side, Stapleton is underserved by a concept such as Punch Bowl Social and so we saw the economic opportunity too.”

From a design perspective, preserving the history of the Stapleton Airport was of the upmost importance for OZ Architecture, an award-winning Colorado-based architectural design firm. “It was really important to the neighborhood to bring it back to its original state,” said Megan Freckelton, associate principal interior designer at OZ Architecture. A subtle nod to aviation can be seen throughout the restaurant/bar’s overall design, so much so that the table tops in the diner area will be a graphic interpretation of the runway and the “Moon Patio” will conceptualize the idea of “space” travel with cool space age features.

“From a design team perspective it gave us the best concept to work with, ever. With Punch Bowl’s we really try to grab on to the site or the history of the building,” said Freckelton. Each and every Punch Bowl Social is designed a little differently and this location is no exception, “We took the golden age of aviation and really ran with it. It’s [also] much more midcentury modern [than the Broadway location]. The 60s was when that glamorous air travel was at its peak.” While the building was structurally sound, not surprisingly, the interior had degraded substantially since 1995. Redevelopment of the tower involved removal of much of the interior structure while preserving the familiar architecture of the exterior — much of the original brick, steel and concrete will remain.

Punch Bowl will occupy the first two floors and the third floor will house the company headquarters. There are no plans to utilize the remaining control tower in the immediate future but according to Thompson, the company may revisit that option in the future. “We couldn’t figure out a way to make it ADA compliant and a way to monetize that compliance with 400 square feet,” said Thompson.

All Punch Bowl Social’s feature a 360 bar which at this location can be found on the second floor, next to the modern bowling lanes and unique private karaoke rooms that according to OZ will closely resemble your Aunty’s living room in the 60s.

On the second floor, Oz worked hard to emphasize the mid century modern feel with the addition of a custom, pink “atomic looking” fireplace and vintage furniture. “A bright, colorful, mid-mod area with a great view of the mountains on a clear day,” said Freckelton. Setting this location apart from the nine other locations across the country, Stapleton will offer a new outdoor entertainment concept — 14,000 square feet of exterior entertainment space will include an indoor/outdoor bar, astro pool, bocce ball courts and additional seating.

It’s fair to say that Thompson will be hard pressed to find another location as unique or as impressive as this Denver icon and no doubt the long-awaited restaurant/entertainment concept will be a welcome addition to the neighborhood when it opens at the end of October.