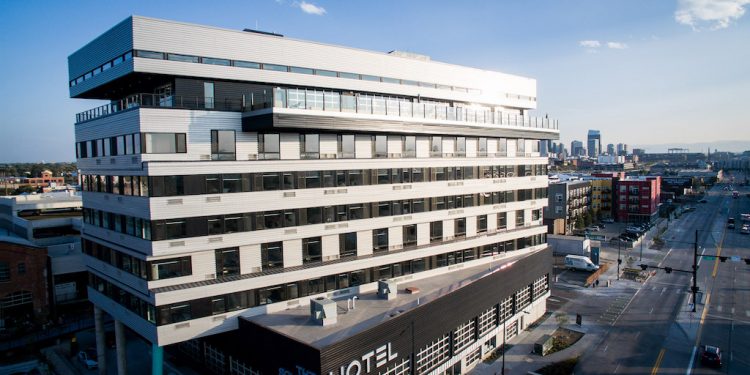 Stephen Dynia, FAIA, design director at Dynia Architects, founded the firm with the goal of making buildings and spaces inspired by the phenomena of nature, fueled by innovation, and motivated by the essence of architecture in society and culture. Known for his ability to push the design envelope, Dynia has led the work for some of RiNo’s most recognizable buildings, including the unique design of the $50 million, 100-room Source Hotel.

What sparked your interest in architecture?

In one’s development as a child, you either understand the world spatially, or not. I was interested in architecture increasingly as a child — I went to a very progressive school that was popular in the late 60s and early 70s that engaged the community and exposed kids to different professions.

People have the misunderstanding that to be an architect you have to be good at math and I never was, I was terrible, I don’t like absolutes. When you’re young, that discouragement is something you have to move beyond and I did that through working for an architect and understanding that I had the abilities that were consistent with doing that work.

What made you decide to start your own firm?

I worked for a large corporate firm in New York City in the 80s and 90s. I loved New York but I didn’t really love corporate architecture because a good degree of your energy is spent surviving politically.

I visited Jackson Hole and realized that there were considerable resources there and no one was designing modern houses. The role of natural phenomena in designing buildings really interested me. I looked at it as an opportunity to explore new ideas.

What is something that people do not understand about the architectural process?

I think that people look at architecture visually and evaluate it in most instances as “style.” While style is the first plateau, the really important thing is proportion. An architect in full possession of his or her talent should be able to understand the psychology of the space.

What is an emerging architectural trend?

As architects, we are eternally looking to avoid trends. In the best sense, architecture is timeless. If you look at a building from the Renaissance, it still has relevance and still abides the proportional system and has the kind of depth that makes it relevant hundreds of years later. When I hear the word ‘trend’ it sometimes goes against the notion of authenticity in architecture.

In a much broader sense — there are so many things technologically that are new on the horizon. The ability to illustrate reality before it becomes a reality is a progressive and ever improving tool in architecture.

Can you describe your relationship with Zeppelin Development?

Because I was familiar with the world of development from my previous life in New York, I realized that it’s very rare to find developers that want to take risks and explore new ideas. Most of the buildings in Denver are done by developers that have a very entrenched manner of financing their buildings. In 2007 we worked with Zeppelin on the repurposing of a freight terminal in Denver and it was then that I learned their focus on developing buildings that have their own culture. Zeppelin are unconventional developers and as we went from project to project, our understanding of one another got better and better. It’s rare to find innovative developers and so I did everything I could to use the opportunity to design some interesting buildings with them.

The thing I am most proud of is that together we have completed three buildings simultaneously and each one is completely distinct. We don’t just make a building and fill it up with stuff, we hope that an aesthetic will grow from within the program and understanding of the site.

The Source Hotel that we just completed is a unique building for a number of reasons. I designed the building to fit into the context of the neighborhood and made it appear to be a series of low-rise industrial buildings. It is the first tall building designed for RiNo and I tried to highlight the horizontality of it.

What have you learned in your career that has stuck with you?

When you visualize, and walk around in a space in your head and then you see it built, there’s a thrill to that in general but you learn something new every time. Your career is accumulated lessons about your thinking about a space, and then the reality of it. There’s also an increasing understanding of the role of buildings in daily life and culture. The talent of an architect, which people often think is about mathematics, is primarily about three-dimensional ability in your brain.

Who has been a mentor to you in your career?

When I think of the architects that I most highly regard, the names Eero Saarinen and Louis Kahn come to mind. Saarinen had a tremendously diverse portfolio of work. He did buildings that were curvaceous before computers came into existence. Kahn’s work is absolutely timeless and you could see it a thousand years from now and you wouldn’t question it.

What do you enjoy doing outside of work?

I really like photography because I like the idea of not creating something but of editing something. You make compositions by taking pieces of the real world!

I also have several automobiles from different eras — I have a ’66 VW Beatle, a couple of 50-year-old Porche’s, and a Chevrolet Covair. They’re not immensely valuable cars but they are significant to me in a sort of nostalgic way.