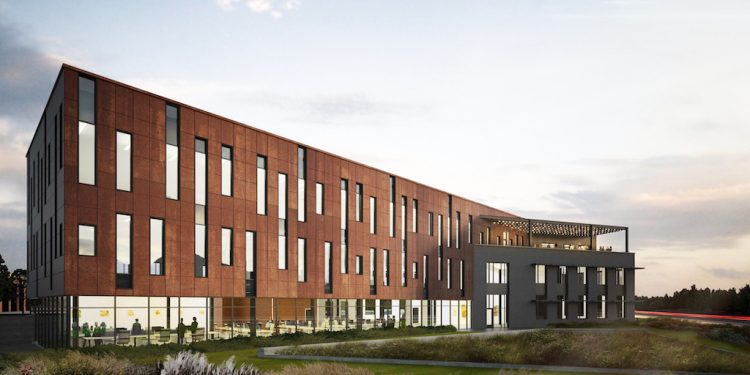 Formed in 2000, Sagebrush Companies is a small Denver-based firm specializing in real estate investments and thoughtful development with holdings throughout the U.S. and Mexico. The company has managed more than $350 million in new developments that include multifamily apartments, multifamily condominiums, office and retail.

“We are opportunistic when it comes to development — if it’s a good deal then we will take a look at it,” said Don Caster, principal/president of Asset Management & Development for Sagebrush Companies.

Three of the firm’s latest, stand-out projects in Colorado include a creative industrial office development in Boulder that will break ground early next year, and two for-sale luxury townhome developments in Denver.

Early next year, Sagebrush will begin construction on a 54,000-square-foot speculative industrial office building at 5125 Pearl Pkwy in Boulder that will cater to the city’s constantly evolving tech community and demand for more creative industrial office space. The three-story building will be located on a 2.5 acre site, just one mile away from the new Google campus.

“This will be a high quality creative industrial office building that will fill a need in Boulder, especially considering the impact of the new Google campus and explosive development on the east edge of Boulder,” said Robert (Jake) P. Jacobsen, CEO, principal and founder of Sagebrush Companies.

The Beck Group will serve as both the architect and general contractor for the project and the Class A building will meet Boulder’s strict Gold LEED standards.

A complete overhaul of the buildings original, more futuristic design, was necessary due to high costs and difficulty finding a contractor who could build the design. The new more conventional design brought the price per square foot down from $400 per square foot to $200 per square foot — a testament to the Beck Group’s expertise.

“Our integrated design-build model provides Sagebrush Companies with a single point of contact for design and construction, speed to market, enhanced cost and schedule control, and the ability to maximize the design within budget through target value design,” said Doug Spuler, managing principal at The Beck Group. With demand for for-sale properties in Denver so high and supply at record lows, Sagebrush is working hard to cater to the demand.  The firm has already completed 54 other townhome projects in Denver, and two of their latest luxury townhome developments are projected to sell-out before completion.

29ZEN is a luxury townhome development in downtown Denver’s Highlands neighborhood. Its unique design, unlike anything else in the neighborhood, is sure to make an impact when it is complete at the end of the year.

Located at West 29th Avenue and Zenobia Street, the for-sale townhome development will include 14 residences, with prices starting at $649,999. The development will feature two and three-bedroom units, with an average square footage of 2,000 square feet.  Rooftop decks with views of the Denver skyline, and walkout basements are available with select townhomes.

“This was a great land opportunity for us. No one is really building high-end luxury townhomes, they are all just standard boxes,” said Caster.

The architect is sanzpont [arquitectura] partnered with local engineering team S-Arch, the general contractor is K2 Construction Management and the brokerage firm is MileHi Modern.

“After visiting the site, its surroundings and several comparable properties in the area, we discovered a distinctive concept when designing townhomes in Denver; the repetition of the units with only a slight variation in the façade. We decided to preserve this concept while adding a building envelope that would wrap the volume and unify the units, so they are perceived as a continuous structure,” said Victor Sanz Pont, architect and director at sanzpont [arquitectura]. “We wanted to impart a sense of identity and uniqueness to the building, creating distinctive elements that will make it recognizable.”

Inspired by the rocks of the snowy mountains of Denver, sanzpont used an innovative Porcelanosa product, an ultra-thin, large-format, ventilated porcelain tile system. “The texture of the white stony marble is inherent to Denver’s snowy winters. In addition, elements of wood texture provide necessary warmth and offer a subtly elegant appearance. The third component is stainless steel, which complements the other elements with an industrial edge.” Named for the 6.7-acre park located on West 23rd Avenue and Clay Street in the heart of the neighborhood. The neighborhood offers immediate access to downtown Denver via the 23rd Street bridge, which leads to the Riverfront areas of downtown.

The 23 Jeff Park townhomes will average 1,550 square feet, with prices starting at $699,000. They will be three stories, with two car garages and rooftops with views of downtown Denver and the 6.7 acre park, located in the heart of the neighborhood.

“The townhomes sit up on a hill about 15 feet, facing Jefferson park. It’s a high-end development with brick and steel exterior and high end finishes on the inside,” said Caster.

The designer is MC Designs, Maureen Conway and the general contractor is K2 Construction Management.

“24 Jeff Park was very well received and sold out rapidly due to the quality of design and construction, and an incredible location,” said Robert “Jake” Jacobsen, CEO and founder of Sagebrush Companies. “23 Jeff Park will have all of the same qualities, and provide buyers with a great place to live, work and play in downtown Denver.”