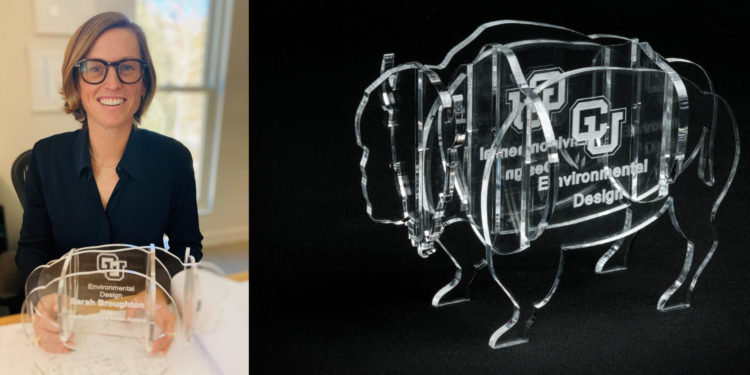 Only the second year it has been presented, the ENVD award honors individuals who have demonstrated leadership and made significant contributions to the design and architecture professions. The 2020 Young Designer Award, also in its second year, was presented to Mike Blea, co-owner of Raw Creative in Denver.

“Sarah Broughton is a great example of the progressive and broad thinking that is leading the architecture profession forward,” shares Paul Chinowsky, director, Program in Environmental Design, about the selection of Broughton for the award. “The design work that she leads at Rowland+Broughton combines the awareness of user needs with the elegance of a design philosophy that captures the natural beauty of Colorado and the progressiveness of the West. I believe Sarah is great example for the next generation of designers who are looking at bringing the natural environment into a central role in their design solutions. It is an honor for CU Boulder to have played a part in Sarah’s successful career.”

About receiving the award, Broughton shares, “It is extraordinarily rewarding and humbling to have been singled out for this honor, especially from among the many talented and worthy design professionals who are graduates of the UC Boulder Program in Environmental Design. I value my time at CU and attribute the professional foundation that I received through ENVD as critical to my career. Thank you to last year’s award recipient, Boulder Architect Harvey Hine, for putting my name forward as a nominee, and to ENVD Program Director Paul Chinowsky and the Environmental Design Alumni Relations Team for their efforts in establishing the award. It is so meaningful that they  are recognizing the community of graduates as a whole.”