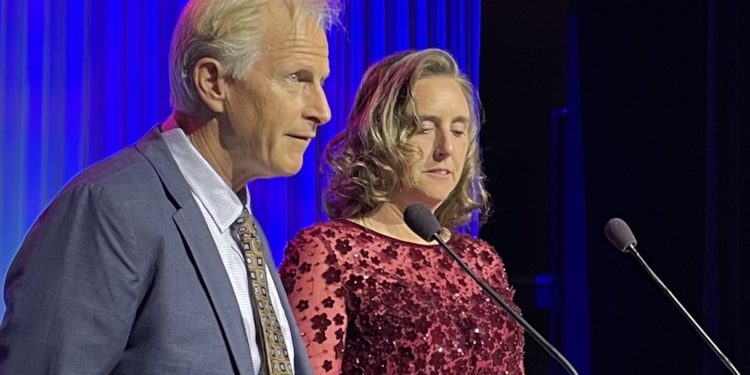 Urban Land Institute (ULI) Colorado celebrated six projects and two individuals before an audience of 450 attendees at the fifth IMPACT Awards held at the Seawell Ballroom, Denver Center for the Performing Arts, on September 23. Since 2013, the IMPACT Awards have highlighted ULI best practices in land use and real estate.

“The winning projects and people highlight the balance of ULI work between social equity, sustainability, and market-driven performance,” said Ferd Belz, chair of ULI Colorado. “We were pleased to honor projects that emphasize these factors as well as economic development, affordable housing, transit-oriented development. And just in Denver but Adams County, Colorado Springs, and Grand Junction, with high-quality entries from as far as Telluride.

“It was a pleasure to honor the lifetime achievement of Buz Koelbel, part of Colorado’s legendary multi-generational real estate company, now the state’s largest producer of tax-credit affordable housing. Almost 25 years ago Buz also founded ULI Colorado as one of ULI’s biggest and most effective field offices. Our Rising Star, Grand Junction native Jenny Jacobs of East West Partners, represents the brightest of the coming generation.”

Chosen by a distinguished jury from 15 finalists in five categories, the winning projects are:

Innovation category: A project that exemplifies innovation in land planning, finance, green tech, or another significant area (sponsored by Redland).

TruStile Doors’ Headquarters and Denver Production Plant combines a 65,000-square-foot corporate headquarters with a 220,000-square-foot modern factory that provides 500 jobs in Adams County. The project remediated a 12.8-acre brownfield while combing solar arrays and a biomass boiler that slashes energy use by about half.

Influence: A project that has inspired imitation by demonstrating positive community impact and financial success. (Sponsored by Brinkmann Constructors)

McGregor Square replaced a parking lot with a mixed-use entertainment/hotel/residential district and on one city block next to Coors Field.

Inclusive: A public or private project that is inclusive of all people and works to provide. equal opportunity to the diverse incomes, races, ethnicities, genders, and cultural heritage that abound in Colorado (new category sponsored by Vectra Bank Colorado).

Arroyo Village in Denver’s West Colfax area is the first Colorado project to encompass a continuum of housing for people experiencing housing instability. Under one roof, it includes a homeless shelter, permanent supportive housing, and affordable/workforce housing next to a renovated city park and light-rail station.

Legacy Award: Walter A. “Buz” Koelbel accepted the Legacy Award for Lifetime Achievement by thanking the community and his family, including his three sons now working in. Koelbel and Company.

“When younger,” said Koelbel in accepting, “You simply don’t understand everything being absorbed, watched, and experienced through the years at ULI.  Until looking through the rearview mirror, I was not aware of how much I absorbed that ultimately was utilized for the strategic real estate decisions I have made throughout my career.”

The ULI Colorado awards committee was co-chaired by Tom Kooiman of Brinkmann Constructors and Becky Stone of OZ Architecture.

ULI Colorado’s IMPACT Awards are based on ULI’s Global Awards for Excellence honoring built projects that demonstrate such ULI best practices as smart land use, sustainability, resilience, innovation, affordability, diversity, equity, and inclusion. The
IMPACT Awards occur every other year with the next applications open in early 2023.