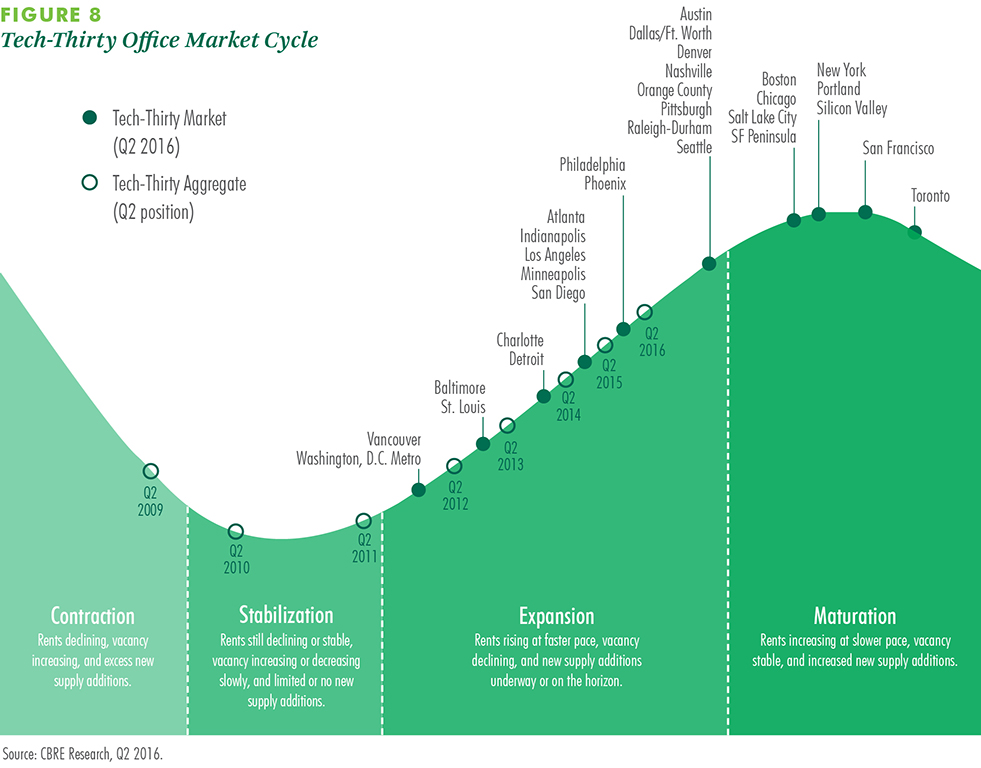 Denver, CO – Denver continues to have one of the strongest technology sectors in North America according to CBRE’s annual Tech-Thirty list, which analyzes the 30 leading technology markets in the U.S. and Canada in terms of high-tech software/services job growth. The Denver highlights include:

“Denver continues to be one of the most sought after tech markets in North America,” said Alex Hammerstein, senior vice president with CBRE’s Occupier Advisory & Transaction Services in Denver and member of CBRE’s Technology and Media Practice. “As the tech sector matures, we’re seeing job growth shift from ‘breakneck’ to a more sustainable ‘brisk,’ which will translate to steady long-term growth and a stable, healthy Denver office market.”

“Tech firms want to be in Denver. While this report is focused on tech’s impact on office markets, it’s important to understand why tech is thriving in our city; and, that’s because Denver is a talent-rich market, it offers a cost-effective operating alternative to markets like San Francisco/Silicon Valley and Denver residents have great quality of life. All of these factors will continue to drive tech growth in metro Denver.” Office Rents in the Tech-Thirty
The CBRE report shows that office rents for the top submarket in each of the 30 markets analyzed increased in all but one submarket between Q2 2014 and Q2 2016. The highest rent growth in this period occurred in both established and up-and-coming tech submarkets, illustrating stiff competition among tenants to locate in areas rich in talent such as University City, Oakland/East End Pittsburgh, East Cambridge, Palo Alto and Tempe. Average office rents in Indianapolis’s top tech market, the Central Business District, rose 6.3 percent to $19.33, compared to 5 percent to $18.09 for the overall market over the same time period. From Q2 2013 to Q2 2015, Indianapolis office rents grew 4 percent.

The CBRE report identifies Indianapolis as a “High-Potential” market, along with Detroit, Boston, New York and Toronto, due to its strong job creation and office market fundamentals. Job Growth in the Tech-Thirty
CBRE also analyzed the Tech-Thirty markets according to high-tech industry job growth. San Francisco topped the rankings for the fifth consecutive year; its high-tech job base has grown 47.0 percent between 2013 and 2015, while average asking rents increased by 22.7 percent from Q2 2014 and Q2 2016. Eighteen markets outperformed the U.S. average of 13.7 percent job growth in high-tech software/services, with Phoenix (44.5 percent), Austin (33.3 percent), Charlotte (33.2 percent), and Indianapolis rounding out the top five.

Over the past five years, the software/services industry created 780,000 new jobs at a 7.3 percent growth rate and accounted for nearly 20 percent of major leasing activity. In H1 2016, tighter labor and volatile capital market conditions led to job creation slowing to a 4 percent annual growth rate, which had a slight impact on certain office markets, like Washington, D.C., New York and the San Francisco Bay Area. “Advanced technology has integrated itself into business productivity and although the talent pool is limited, strong demand for technology services from both businesses and consumers is expected to support hiring by high-tech firms. The skills of the available labor pool do not appear to align with available jobs, causing a structural barrier to growth,” said Colin Yasukochi, director of research and analysis, CBRE. “This demand for technology should support growth among high-tech companies and high-tech office market clusters.”