YOU ARE HERE:Home » Construction » The Foundry Celebrates Grand Opening in Downtown Loveland
ConstructionDevelopmentEventsFeatureHospitalityMultifamily 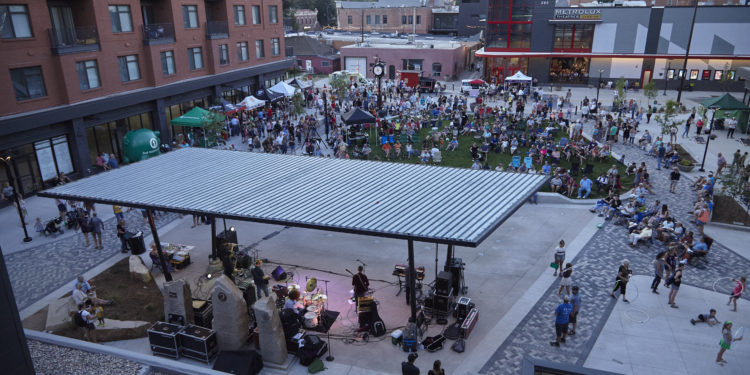 City officials, staff, project team and community members gathered to celebrate the official Grand Opening of The Foundry on Thursday Aug.15. The Foundry is a $76 million public/private partnership with the City of Loveland, Brinkman and investment partners Brue Baukol Capital Partners and Colmena Group. 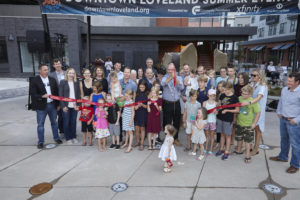 Formerly known as “South Catalyst”, the project was conceptualized by the City of Loveland more than a decade ago as part of their Downtown Strategic Plan. The development includes Patina Flats, two mixed-use apartment buildings with 155 units, first-run MetroLux Dine-In Theatre, TownePlace Suites by Marriott, a 460-stall parking garage and a community plaza. Brinkman is an owner in all parts of the project, Brue Baukol Capital Partners co-owns the mixed-use buildings and theatre, and Colmena Group co-owns the hotel. The City owns the public parking garage.

“This has been a true community partnership,” said Jay Hardy, president of Brinkman. “The City has driven the vision for this dynamic development that we hope will add to the vibrancy of downtown Loveland. It’s been exciting to help bring hat vision to life.” 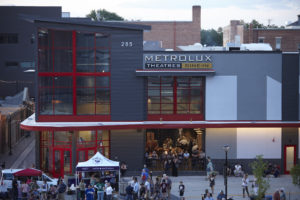 “We painted the hard hats and shovels that they used for the groundbreaking,” Haslund-Nielson recalled. “We were supposed to paint our vision for the future of Loveland, and The Foundry is making it come true.” Mike Scholl reveled in the fact that downtown Loveland now has a first-run movie theatre right in the heart of the downtown district. “It’s amazing that we have that. It’s going to draw even more people downtown to spend time with their families.

Although the event celebrated the opening of the entire project, the public parking garage and Patina Flats have been open since August of 2018. The apartments have remained 96 percent leased since shortly after opening. The 63,550-square-foot, four-story TownePlace Suites by Marriott opened on July 31st with occupancy rates hovering around 80 percent in the first two weeks. Catering to business travelers and tourists, the hotel offers 102 rooms with free wireless internet and pet-friendly accommodations while featuring a lounge, indoor pool, fitness center and 1,000 square feet of divisible meeting space.

The grand opening also marked the first day of business for the seven-screen, 625-seat MetroLux Dine-In Theatre. This flagship of the 43,000-square-foot central community plaza is a main draw for entertainment and arts to Downtown Loveland. The theatre features first-run movies and includes Scripted, a full bar and restaurant, and reclining seats. Movie goers will have
the opportunity to dine in the restaurant or “eat at their seat” during the films.

Hardy announced at the event that the first commercial lease for the mixed-use buildings has officially been signed by Mo’
Betta Gumbo. Chef Clay Caldwell, owner of Mo’ Betta Gumbo, will move from his current location at 4th and Cleveland to
the ground-level commercial space at the corner of 3rd Street and Lincoln Avenue. He currently plans to be open in the
new space this winter. Hardy mentioned two other commercial tenants that are likely to be announced soon for the
Cleveland building.

The ribbon cutting ceremony was followed by a public concert by Euforchestra, along with food and drink vendors. The
concert was part of the “One Sweet Summer” event series managed by the Loveland Downtown Partnership. The group is
responsible for ongoing community programming in the public plaza.