YOU ARE HERE:Home » Condominium » Transforming a Complicated Site into Improved Guest Experiences
CondominiumConstructionDevelopmentFeatureLandscaping 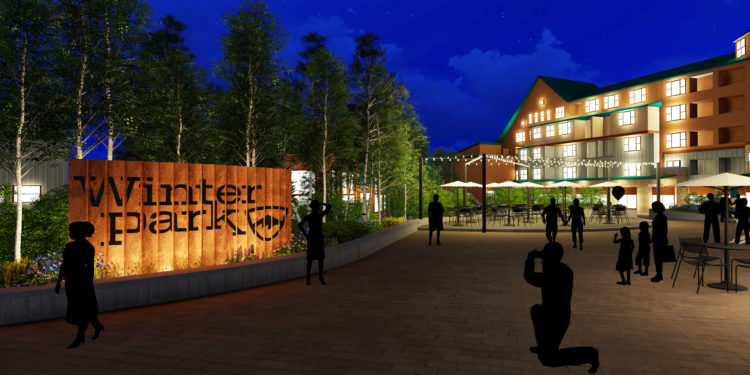 From a real estate and construction perspective, the redevelopment of the Zephyr Plaza at Winter Park Resort doesn’t get much more complicated. The plaza was originally constructed in 1999, as part of the base area development that included the Zephyr Mountain Lodge (230 condominium units) and the Zephyr Chairlift. Decades of extreme winter weather and perpetual snow removal took its toll on the plaza. It became apparent that the plaza needed a snowmelt system but nothing about that was simple.

The plaza is owned and maintained by the Winter Park Village Community Master Association (WPVCMA). The Zephyr Mountain Lodge Homeowners Association (ZML) owns the parking structure that sits underneath the plaza. This creates horizontal “condominiumization” of the land, with WPVCMA owning directly on top of the below-grade parking garage to the surface of the plaza. Navigating multiple owner’s needs for upgrades in the same footprint required complex scheduling and phasing with multiple contractors. 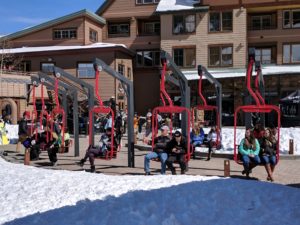 When this project started, Intrawest owned Winter Park Resort. Alterra Mountain Company subsequently purchased the resort, just as the plaza was starting construction. Almost immediately, Alterra invested in replacing the Zephyr Lift with a 10-person gondola, which required an additional 15,000-square-foot-plaza for skier staging. This additional plaza, including a snowmelt system, was quickly integrated with the redesign and reconstruction of the Zephyr Plaza. This portion of the project required that another owner, the Denver Water Board, be brought on to the project, as they own an abutting easement that contains a six-foot diameter water syphon. Gary DeFrange, former Winter Park Resort president, had a vision of how snowmelting Zephyr Plaza would transform the guest experience. “I started promoting the idea of improving the plaza in 2012. With the complex ownership structure and diverging interests in what it needed to accomplish and how it would get done, took several years to get all parties aligned,” DeFrange said.

WPVCMA, consisting of residences, business owners and the resort, had to approve the capital improvements budget. The original budget was for a project that included the careful deconstruction of the plaza and the reconstruction of what was there before, while adding a snowmelt system in the process. However, DeFrange saw this as a once in a 20-year opportunity to improve circulation, engage retail storefronts, and create gathering and event spaces. This new vision would cost more than twice the expense of just installing a snowmelt system. The plaza design and its budget required the approval of more than 400 members of the Community Owners Association.

To garner support, Design Workshop (the plaza designer) attended the annual homeowners meeting and set up a Virtual Reality (VR) station. This allowed residential and business owners to see what the fully redesigned plaza would look like, how it would feel and how it would function. Owners of condominium units were even able to “look” at the proposed plaza from their balconies. Ultimately, 94 percent voted to approve the $1.8 million plaza redesign budget.

The design team used VR at a scale where participants could view every detail. Embracing its adjacency to the ski resort, the plaza design incorporated nine swings made from recycled chairlift seats from the Timberline lift, once Colorado’s highest chairlift. Designers modeled and virtually tested numerous alternatives of swing options and operations to ensure comfort and safety before arriving at the final design. The virtual review process streamlined collaboration, allowing the WPVCMA director and resort team to provide feedback on the design via live mark-ups and comments. Additionally, fabricators were able to have input on the design in the virtual space, commenting on the constructability of the swing designs, which significantly shortened the fabrication process.

Also notable was the construction timeframe — from the day the resort closed for the winter in May 2018 to opening day in November later that year. Multiple contractors had to coordinate schedules to ensure retail stores fronting the plaza had access all summer. At this time, the Zephyr Mountain Lodge took the opportunity to perform maintenance and improvements on their parking garage, as the plaza demolition uncovered the top of the garage for the first time since it was constructed. Due to weight restrictions on the loading of the garage lid, high density foam fill was used to achieve rough grade and a paving sub-slab was installed above the foam. Next came the snowmelt system and the final sand-set concrete unit pavers. The plaza includes improved circulation and access to the retail stores, a performance stage, custom-designed firepit, numerous planters for seasonal planting, and a custom Winter Park Resort sign welcoming skiers to partake in that perfect Instagram moment. Then of course there are the always popular chairlift swings. Furniture such as benches and tables are movable to maximize flexible uses of the space.

“There were so many moving parts that had to come together seamlessly. Hiring a full-time project manager to oversee the construction was one of the best decisions that we made,” said Kelly Mace, director of Lodging and Property Management for Winter Park Resort.

Although the new plaza has been completed for less than a year, everyone is reaping the benefits. Pedestrian circulation now goes right by retail storefronts, the awards stage was used nearly every week last winter season following a variety of races on the mountain, and the design dramatically improves accessibility in support of the thousands of participants in the National Sports Center for the Disabled (NSCD) program who pass through the plaza each year. The multi-functional space hosts events and program of all sizes and in all seasons, from Snoga (snow yoga) classes that take advantage of the snow-melted surface to Wild West Whiskey Fest and Village Uncorked!, a food and wine festival. Today the red chairlift swings are Instagram gold and are the backdrop for countless selfies. “The plaza has been used for one winter and one summer season. We receive so many positive comments. Guests love it,” said Sky Foulkes, current president of Winter Park Resort.

About Becky Zimmermann: Becky has devoted her career to solving complex issues in the areas of community planning, market and economics, and resorts and tourism. She is recognized for her work in leading communities, companies and organizations in strategic and business planning, market definition and strategy, development entitlements, real estate economics, facilitation and advisory services. She has also been integrally involved in leading community participation processes and facilitation for projects. Her work has been published in Metropolis magazine, Landscape Architecture Magazine, Urban Land, and a variety of local periodicals. She has served on the Denver Mayor’s Commission for Disabilities and the Leadership Advisory Council for the Colorado Nonprofit Association. For more information, visit www.designworkshop.com.