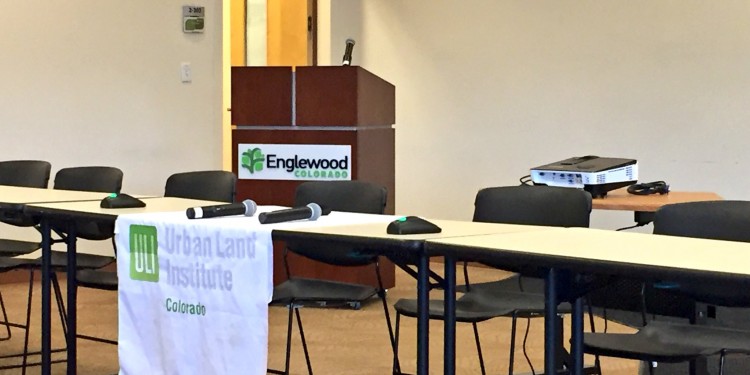 On Wednesday, Jan. 31, Urban Land Institute (ULI) Colorado hosted a public presentation to review findings and recommendations from part of a national study, the Building Healthy Places Initiative, to convert strip corridors into healthy places to live and work. ULI formed a panel of eight experts to conduct studies across the U.S. to recognize that advancing healthy lifestyles is not only the responsibility of health institutions.

In April 2017, ULI Colorado formed the South Broadway Local Leadership Group to study the South Broadway Corridor in Englewood, specifically exploring the two-mile area from Oxford to Yale Avenues. The study identified how the area accommodates healthy lifestyles and examines issues such as walkable neighborhoods, traffic issues and access to healthy food.

Panel Moderator Marilee Utter, founder of CitiVentures, stated after exploring Englewood that the city should focus on linking South Broadway to the medical center and to the Englewood Civic Center area, creating an East-West Corridor; improving pedestrian walkability; and promoting under developed sites.

Chris Ronayne, president of University Circle Inc. in Ohio, explained that the city has potential for an East-West corridor, more directly linking the RTD Englewood Station to Swedish Hospital. A project that would include straightening Englewood Parkway. Ronayne proposed that in straightening this connection, the city would be able to add a bike network by adding bike facilities at the RTD station, at the intersection of Girard and Hampden Avenues, and in the hospital district.

He stated that another step in linking the areas would be to partner with health-related anchor institutions, Swedish and Craig hospitals, to create a sense of community. Rooted in the idea of “Live, Hire, Buy” local initiatives, this proposition focused on enhancing community programming through opportunities such as hosting farmers markets and healthy eating educational programs for school children.

In addition to adding a bike network, Ronayne also recommended forming a Transportation Management Association, which could work to synchronize shuttle services to work schedules and maintain a transit alert system.

Aside from connecting the community via transit, the panel suggested enhancing trail connections to Platte River and Little Dry Creek, as well as adding community sponsored signage promoting active, local choices. These signs would have information such as where to find green spaces, parks and coffee shops, as well as notate how long it would take to walk or bike to these locations. This campaign would focus on inspiring people to enjoy being in the community by investing in buying locally and spending time around the city after work and on the weekends.

“Make people come downtown and feel like there is a community,” exclaimed Utter.

Terra Ishee, director of Pedestrian Projects Group for the New York City Department of Transportation, advised reclaiming a community feeling through traffic control. Ishee explained that slowing down road speeds makes people appreciate the area and increases its value. She advocated for reallocating lanes to other transportation, such as bike, bus or pedestrian. Additionally, the panel emphasized enhancing the pedestrian experience by adding more art and raised crosswalks mid-block, causing traffic to slow down.

Dan Patrick, principal at Poticos Design, Inc., advised the city to explore horizontal and vertical mixed-use property potential as well as broader affordability, promoting diverse housing choices. He emphasized the idea of “aging in place,” a concept of moving within the same community to different properties as lifestyle needs change; for example, moving from an apartment to a single-family home to a duplex or townhome. He also noted that as a result of both need and choice, multi-generational options such as accessory dwelling units are becoming more popular.

For any improvements that are considered, decisions need to take into account what would impact community routines the most and reflect how spaces across the community would be best used for day to day purposes. By forming a neighborhood association, strategic, thoughtful plans can be organized through resident-led efforts.