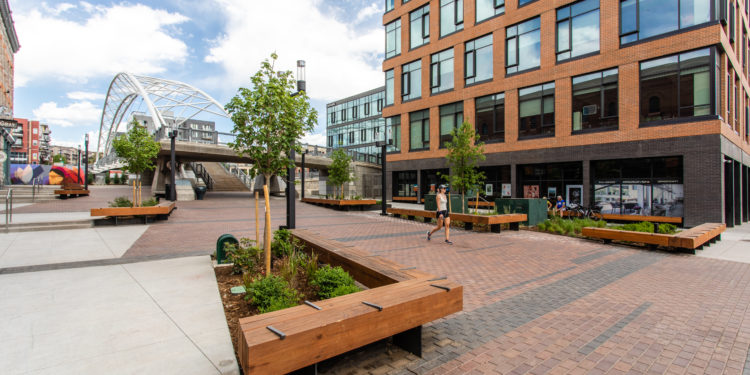 Unico Properties, a subsidiary of Unico Investment Group LLC, recently completed Platte Street Plaza, a community amenity space at the base of the Highland Bridge. The project was made possible through a public/private partnership between Unico Properties LLC and the City & County of Denver, with the $1.7 million in equity required for the project furnished by Unico.

“Platte Street Plaza is designed to become the heart of the neighborhood,” said Austin Kane, vice president and regional director for Unico. “It’s built for the employee needing a mid-day break, for the commuter who wants to stop and enjoy the Colorado sunshine, and for residents and visitors meeting up before heading out to their favorite shops, restaurants or bars down the street. A new chapter is being written for Platte Street, and this plaza is going to be a big part of it.”

Located between the historic Zang building and The Circa Building, the new Platte Street Plaza transformed the underutilized pedestrian and bicycle passageway into a park-like setting with new trees, flowers and plants, along with ample seating – inherently designed to accommodate social distancing. Platte Street Plaza is equipped with free wifi for the public, as well as access to electrical power for pop-ups, farmers’ markets and other community events.

Designed by Dig Studio and constructed by Swinerton Construction, Platte Street Plaza received a grant through the Urban Forest Initiative’s Build the Canopy Grant Program for the new trees. This program is a collaboration between the Downtown Denver Partnership, Downtown Denver Business Improvement District, and the City & County of Denver, with funding support from private donors.

Unico engaged NINE dot ARTS to commission Denver artists Jaime Molina and Pedro Barrios to create two large-format murals for Platte Street Plaza, visible from both Platte Street and I-25. Celebrating the history of the area, the artists’ concept chronicles the transition of Platte Street from its origins as a gold-mining area into the vibrant modern neighborhood it is today.

“Platte Street Plaza has had a bigger impact than we could have all imagined,” said Councilwoman Amanda Sandoval, Denver District 1 city councilwoman. “The fact that Unico took it to another level and had local artists come down here, then it becomes more owned by the community. The more that we can create placemaking in Northwest Denver with improvements like this, I think the better Denver will be.”