YOU ARE HERE:Home » Development » Unico Delivers The Circa Building on Platte Street
DevelopmentEnergyFeatureOfficeSustainabilityTechnology

Unico Delivers The Circa Building on Platte Street 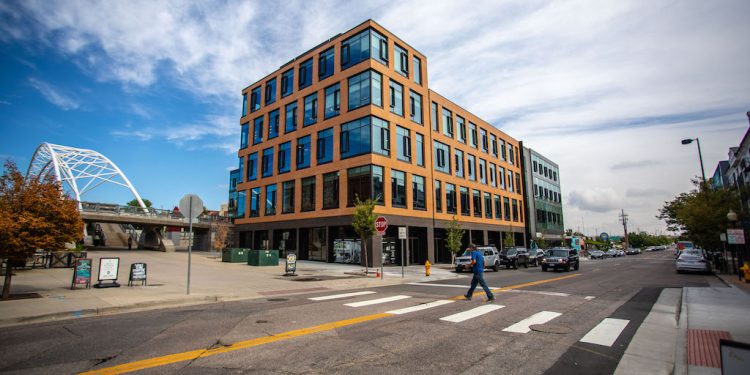 Developers and dignitaries gathered at 1615 Platte St. on Thursday for a Ribbon Cutting event to celebrate the opening of The Circa Building, a LEED Platinum-certified, 96,000-square-foot Class A office building in Denver.

Located at the base of the Highland Bridge — surrounded by LoDo and the Highlands, with easy access to Pepsi Center, Coors Field, Platte River North Bike Trail, and the new West Side Line — the four-story Circa Building is inspired by the area’s 150-year history of commerce and industry. The building’s contemporary design intentionally reflects historical structures found along Platte Street, including the Root and Zang Buildings, which are also owned and managed by Unico. “Unico has long-held appreciation for Platte Street, and over the last several years, we’ve actively invested in this dynamic neighborhood because we saw the opportunity to unlock a deeper potential,” said Jackie Costigan, SVP of development at Unico and principal at Costigan Integrated, a wholly owned subsidiary of Unico, which oversaw the development of The Circa Building. “The Circa Building is designed to support innovators – ready to meet the most demanding of technology requirements, while also respecting the environment and wellbeing of our neighbors. With its delivery, we’ve realized our vision to develop a high-performing building where people can be and do their best in a way that is authentic to the rich history of its location.”

Confluent development served as the development partner, managing the project’s entitlement and construction management. Circa is Confluent’s second project on Platte Street, following its award-winning office development, the LAB, which helped spur the wave of redevelopment in this once industrial area that had previously been considered too far removed from the downtown core to be successful.

“This part of our city is an area that longed for a vision, longed for an identity and a persona, and it longed for investment,” said Tami Door, president of the Downtown Denver Partnership. “The commitment of developers like Unico to invest here and for companies like Xero to come here and invest their resources, their time, and really invest the future of their company, sends a strong message about what’s happening here in our city — our tech companies are growing exponentially and they need space like this in order to get the right team members to help these companies to grow.”

“We chose Denver to be the Americas HQ for Xero really to help support our growth in the Americas and because we wanted to be part of our thriving tech scene that is building here,” Andy Burner, the company’s vice president of people and business operations, said at Thursday’s event. “We are thrilled to among the ranks of some of the best tech companies in the country here in Denver — we think this is the perfect place to do really beautiful business from.” The Circa Building’s impressive solar roof.

The Circa Building was proudly awarded LEED Platinum certification and features multiple sustainable elements such as the white Thermoplastic Polyolefin (TPO) on the building’s roof, which helps reduce the heat island effect, as well as an impressive solar rooftop.

“The solar array on the roof delivers almost 30 percent of the power here and so not only is that an environmentally responsible result, it also delivers much less expensive power for our customers over the long haul,” said Quentin Kuhrau, CEO of Unico Properties.

The solar panels were deployed by Unico Solar Investors, a division of Unico that develops, owns and operates solar energy systems both within and outside Unico’s portfolio. The design also incorporates features such as low-flow toilets, sinks and showers, resulting in a 36 percent reduction in water usage compared to a typical building of this size.

Additional sustainability metrics that contributed to the building’s LEED Platinum certification include state-of-the-art HVAC systems and recycled building materials that were manufactured and extracted within 500 miles of the project site. In addition, 97.3 percent of all regularly occupied spaces at Circa have a direct line of site to outdoor views.