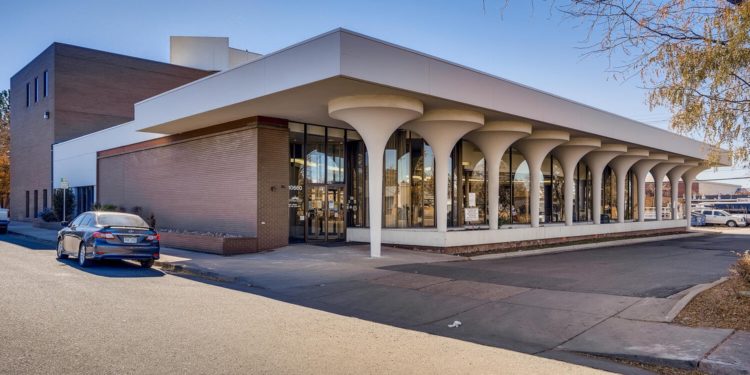 Nonprofit Urban Land Conservancy (ULC) has acquired the former Citywide Bank building at 10660 E. Colfax in Aurora, and has plans to lease the existing office space to nonprofits and other community-serving organizations at below-market rates. This East Colfax Corridor site joins ULC’s seven other affordable-office properties across the Metro Denver region. ULC anticipates partnering with a developer to add affordable housing opportunities to the underutilized lot on the south end of the property.

The site includes 77,101 square feet (1.77 acres) of developed land and improvements, including a 24,228-square-foot office/retail building, 120 surface parking spaces, and a 1,456-square-foot building formerly used as an eight-lane bank drive-thru. The acquisition will help further equitable redevelopment efforts promoted by Impact East Colfax (IEC), a community-focused initiative that ULC co-leads along with The Fax Partnership, an East Colfax-based nonprofit founded in 2004. As a driving component of IEC, steering committee members have been organized through a broad community outreach effort. They will guide and inform the use and future development of this site as well as an additional East Colfax site located within the Denver municipality.

“On this property we will work to anchor long-term community benefit in the East Colfax Corridor, helping to further local community goals, including minimizing displacement of existing residents and businesses,” said Sarah Harman, vice president of Real Estate for Urban Land Conservancy. “Preservation of the iconic, three-story office building will provide a dynamic new Main Street opportunity for nonprofits and community-serving organizations. We’re excited to work with the IEC steering committees and the broader East Colfax community to explore ways this site can be further mobilized as a community hub.”

ULC acquired the property with the aid of the Nesbitt Commercial Group and low-interest funding from the Metro Denver Impact Facility (MDIF).