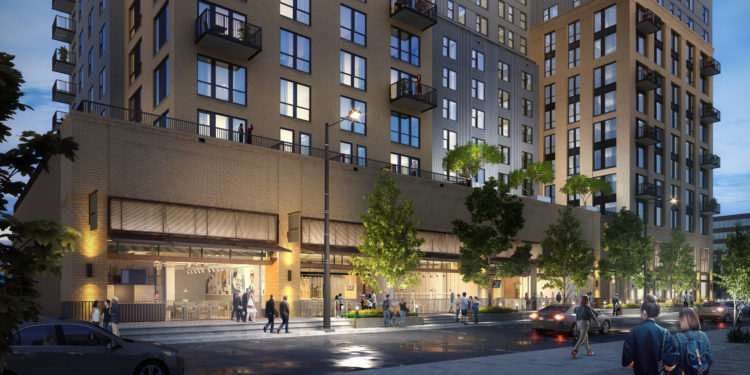 Zocalo Community Development is developing a 13-story, 381-unit apartment community at 35th & Walnut in RiNo that aims to give renters the opportunity to live in RiNo at a rent-check discount (Craine Architecture).

Denver-based Zocalo Community Development recently broke ground on its largest project to date, a 13-story, 381-unit apartment community at 35th & Walnut in RiNo that aims to give renters, primarily those in their late 20s and early 30s, the opportunity to live in a top-class, high-design, high-energy building in River North, but at a rent-check discount to much of the competition.

Principal Real Estate Investors, a subsidiary of Principal Insurance, based in Des Moines, Iowa, is Zocalo’s partner, along with local real estate investment group Brue Baukol Capital Partners. Zocalo Construction is the general contractor. The latest rendering from Craine Architecture suggests that this development stands to be one of most distinctive buildings in the development mecca that is RiNo.

According to developer Ted Featherstone, Zocalo was drawn to RiNo’s diverse mix of development uses and future growth potential. “David Zucker and I have been really attracted to the RiNo market for a couple of years now and our interest peaked when Denver announced the intention to up zone everything around the 38th and Blake station because we believe fully in Denver’s vision that the transit-oriented node could really become a mini CBD in the next five, 10 or 15 years.”

Smaller units are surprisingly under provided in Denver. Currently in River North, studios make up less than 15 percent of the supply yet the price appreciation has been much sharper in the past three of four years than it has been for one or tw0-bedrooms. According to Featherstone, that is because rents have increased so much faster than incomes have. 35th and Walnut will meet that demand by providing 40 percent studios.

The development will focus on smaller, efficient unit types, lean unit design – rethinking every finish, fixture, and convention so as to eliminate the unnecessary or low-utility and to invest instead in the high-value and the innovative. Development and construction efficiencies are derived from 400-unit-to-the-acre density and construction typology, with finishes and mechanical systems focused on systems-thinking from the structural system through operations.

“These are certainly not micro-units but instead our unit mix is in studios and smaller one-bedrooms,” said Featherstone. Studios will range between approximately 400-530 square feet and one-bedrooms will be approximately 575 to 700 square feet. All units will still provide high performance, full-size kitchens, bathrooms and closets.

In exchange for the additional height allowance granted by the City of Denver, 35th & Walnut will also provide 18 affordable units for qualified renters earning 80 percent of AMI. In addition to the affordable units, studios will start at $1400, one-bedrooms at $1600 and two-bedrooms at $2400.

“Zocalo has a long history of supporting affordability. We are partially an affordable housing developer, ” said Featherstone. Zocalo is also nearing the final stages of construction on 101 Broadway, a 102-unit income-restricted affordable housing development at 1st Avenue and Broadway, but their experience with affordable housing goes back way further. Zocalo actually built units back in the days of Denver’s Inclusionary Housing Ordinance (IHO), instead of merely paying the required fees. The ethos of the company is that diversity makes communities stronger, and so incorporating affordable units into this project at 35th and Walnut was something Zocalo was more than happy to do.

Given the skyrocketing cost of construction, many developers struggle to make a profit when offering affordable units but Zocalo believes that their operations as both a developer and a general contractor gives them a unique advantage. “As costs increase being your own builder and having a much closer connection between the development and the construction teams and just being able to be so much smarter in what you’re designing and how you’re going to build, is a big benefit in terms of ability to manage your costs,” said Featherstone.

Given the fact that there are not many places in Denver that people can live without a car, Zocalo believes that this area of RiNo stands to become — much like Union Station neighborhood — a place where a car is not necessary. The area around the 38th and Blake station, on the eastern side of the tracks, is highly walkable, offers access to transit and no “no zoning-required parking minimums” within a half mile of the RTD station. As a value proposition to their tenants, residents will have the ability to avoid the expense of a monthly car payment with everything they need right at their doorstep or within a couple blocks — an attractive proposition today when the cost of living is so high in Denver.

Amenities such as a high-quality fitness center that will allow residents to forego their outside monthly gym membership to save money. River North also has the highest number of work-from-home individuals than any.submarket in Denver and so designing a space that residents can work was a top priority for this project so that residents can avoid the additional cost of renting a coworking space.

35th and Walnut will also integrate an affordable and green IPS HVAC system that is much more energy efficient and will provide much lower utility costs to both landlords and tenants.

On the ground level there will be 9,500 square feet of retail space. Zocalo does not yet have an operator for retail spaces.

Demolition began in March and the development is currently one level below ground in excavation. Project completion is expected early summer 2021.

Vaisala to Break Ground on OZ Architecture-designed Building in Louisville