YOU ARE HERE:Home » Awards » CBRE’s Paul Kluck named 2016 Broker of the Year by DMCAR
AwardsBrokerage 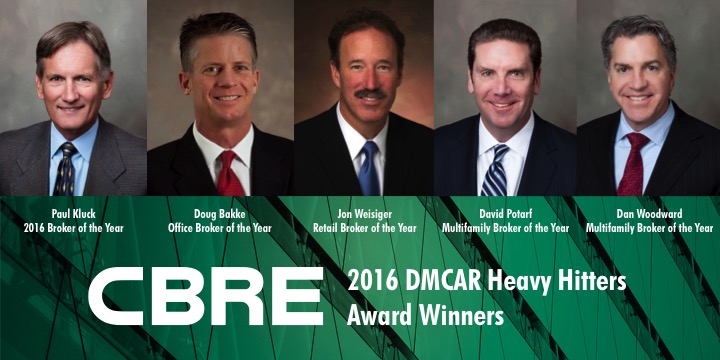 DENVER – CBRE Group, Inc. announced today that five of its Denver professionals were honored as the top in their field at the Denver Metro Commercial Association of Realtors (DMCAR) annual Heavy Hitters awards event on March 3, 2017. Paul Kluck was recognized as overall Broker of the Year. In addition, Doug Bakke was named Top Office Broker of the Year, Jon Weisiger won Top Retail Broker of the Year, and the team of David Potarf and Dan Woodward received Top Multifamily Broker of the Year.

“Our professionals work tirelessly day in and day out to provide world-class service to our clients, and we are so proud to see their hard work recognized at this year’s event,” said Pete Schippits, senior managing director and market leader for CBRE in Colorado. “In addition to their impressive sales and lease volumes, each of these individuals operates with honesty, integrity and enthusiasm for what they do—which is why we see their names time and again listed among the best of the best.”

Paul Kluck, a first vice president with CBRE Industrial & Logistics Services in Denver, received the event’s top honor—Broker of the Year for 2016. A 26-year veteran of Denver’s commercial real estate industry, Mr. Kluck was nominated based on his long-standing reputation for outstanding client service, his leadership participation in industry groups and his commitment to mentoring the next generation of brokers.

“I am honored and humbled to receive this award,” said Mr. Kluck. “DMCAR was instrumental in advancing my brokerage business. Being recognized by my peers in this organization is the highlight of my career.”

Over the course of his career, Mr. Kluck has leased and sold almost 20 million square feet of space with a total consideration in excess of $416 million. He has served as a past president for DMCAR, the SIOR Colorado Chapter and BOMA Denver Metro.

Finally, the multifamily team of David Potarf and Dan Woodward, both executive vice presidents with CBRE Capital Markets, were awarded 2016 Multifamily Broker of the Year by DMCAR.

Several finalists from CBRE were also recognized at the event, including Mike Winn and Tim Richey, runner-ups for Investment Broker of the Year; Eric Roth and Martin Roth, runner-ups for Land Broker of the Year; Jim Bolt, Tyler Carner and Jeremy Ballenger, all within the top six for the industrial category; Matthew DeBartolomeis, a top five finalist for top retail broker; and Matthew Barnett and Jake Young, both top 10 finalists in the multifamily category.