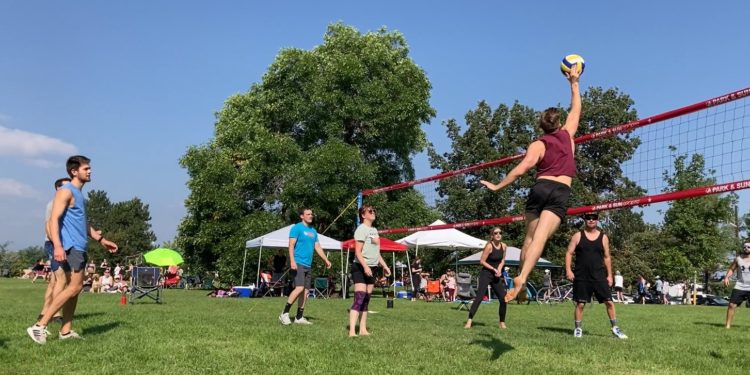 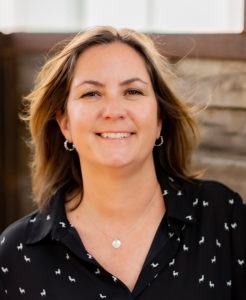 When some designers at a few Denver-area architecture firms decided to decompress from the studio by getting together to play volleyball at Washington Park back in 1979, they started a local AEC industry tradition that’s still going strong today after more than 40 years. Now a four-division volleyball league that includes more than 50 teams, The Designer Volleyball League is back in action in 2021 after the COVID-19 impact thwarted a formal season last year.

Pete Pappas, owner and principal of Pappas Architecture and Design has been involved with the league since the early 1980s, playing and then managing the league’s B and BB divisions. “There were several design firms that would go and play on Thursday nights, and it was all an informal show-up at first, just to get to know each other,” says Pappas. “A few years after we got going, we started sending out a schedule for weekly Thursday night play that culminated with a tournament at the end of the season.”

Momentum grew, and the league went from about five teams to ten and expanded to include contractors, engineering and landscape design firms. The team decided it was time to put a little more structure to the play, formalizing the league and adding another tournament mid-season.

“Around the mid-eighties the league really started to expand to around 30 to 40 teams, eventually getting up to closer to 100 teams before the end of the decade,” says Pappas. “It was starting to get a little unwieldy, so we divided up into different divisions, including an A, B, BB and recreation leagues,” he adds.

With the growth of the league came requirements to secure permits for park use for tournaments and league play. A decision was made to establish a formal non-profit organization to help manage the league, including setting up team entry fees to be put toward permit fees and tournament prizes.

Matthew Ruhland, a commercial real estate attorney and president of the Designer Volleyball League says the non-profit manages the league fees to ensure it keeps going year-to-year as the number of teams participating fluctuates. But the permit fees usually remain static, so after the league buys tournament prizes from locally owned businesses, any extra funds are donated to local charitable organizations. “I’d estimate we typically give $3000-$5000 a year to local organizations,” says Ruhland. The league also continues an early tradition of the league’s founders, which is the donation of a goat to a family via Heifer International. During the registration for the 2021 season, extra donations were solicited from the teams, which resulted in an $1800 donation to the Denver South Food Pantry.

There’s been plenty of changes and consolidation in the AEC industry over the years and while some of the original firms that helped form the league no longer exist (either in town or at all), some such as Fentress Architects have been playing for almost 40 years and still participate today.

“Playing that long has given us a deeper personal connection with our colleagues and design consultants,” says John Kudrycki, principal at Fentress, adding, “After a few top of the net volleys, you get a different perspective on that mechanical engineer that was on the telephone yesterday.”

Other teams that have played in the league for 20 years or more include the RMH Group, IMEG, Swanson Rink and The Lighting Agency. Several firms sponsor their team’s entry league fees, noting it’s worth the investment. Craig Rouse, principal of R Design, LLC, a graphic and environmental/signage design firm, has been playing in the league since 1987. He says it’s evolved into a group of folks that have become friends over the years. “It’s a good mix of the old guard (me), and some younger players that are more agile than I am,” he says, adding, “It’s a great excuse to start looking forward to the weekend with spirited volleyball, beers and friends!”

Landscape architect and planning firm Norris Design joined the league more than 10 years ago. Project Manager Janna Schulte says it’s been a great opportunity not only to get to know her Norris colleagues better since joining the firm nearly three years ago but that it’s also, “Been a great opportunity to familiarize myself with other Denver area firms in the AEC industry,” adding, “I’ve been able to recognize more companies and faces each year.”

There are also those who’ve played in the league in the past who’ve come back. “I originally played in the league back in the mid-nineties when I worked at klipp and had a lot of fun,” said Brett Linscott, associate principal at Architectural Workshop. “As our firm has continued to grow over the last few years, I knew I wanted to get another team together and here we are!”

Architectural Workshop is one of the more recent additions to the league, joining about three years ago. “It’s been a great activity
outside the office for co-workers to socialize more in another setting,” said Linscott. “They are used to being on design teams in the office, but it’s nice to experience teamwork competing together in a sport.”

Allison Hunter says her team, The Mighty Arlos, has been playing since the late nineties. “We’ve all changed employment over the years. It’s awesome to simply hang out with longtime friends every week at the park.”

Pappas and Ruhland both say the momentum is still going strong and people are glad to be able to get back outside and play, especially after COVID last year. “For 42 years, people look forward to playing in the Designer Volleyball League every summer and I don’t think that’s going to stop,” says Pappas.

A Year in Review: Project Retrospectives and a New Frontier Ahead