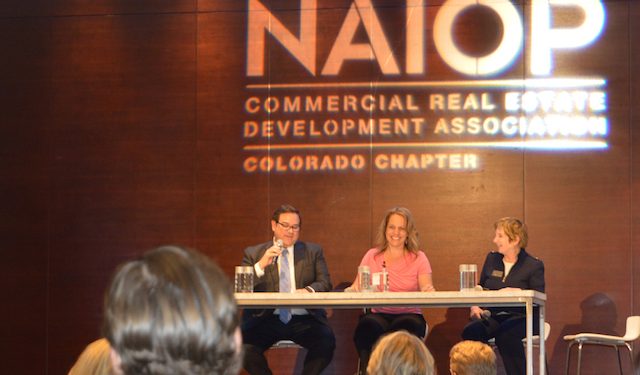 Executive Director of the Colorado Department of Transportation (CDOT) Michael Lewis and President of Zeppelin Places Kyle Zeppeli, opened the forum by debating transportation around the Front Range, specifically the I-70 Corridor. Zeppelin expressed concern for the displacement of resident because of CDOT’s I-70 expansion. He stated that a street grid expansion would serve as a better solution for Denver traffic flow, citing that the street grid model would avoid traffic bottlenecks. Zeppelin feels that the next phase of transportation needs to focus on urban transit or mountain railways to create “reasonable” alternatives to driving.

Lewis emphasized that CDOT understands there is not one universal solution, especially with the projected growth of the Front Range, so multiple complementing solutions need to implement, such as railway and highway projects, in a way that allows for future mobility outside of the street grid expansion model. Lewis explained that CDOT investigates multiple solutions to alleviate traffic, such as bike paths and pedestrian accessibility along interstate corridors, but land use is in part shaped by communities dictating what measures are wanted.

For more resources on this topic, look for local discussions and visit ditchtheditch.com and codot.gov.

City of Lakewood Mayor Adam Paul and City of Golden Mayor Marjorie Sloan explained the effects of anti-growth initiatives and attainable housing around the Front Range, focusing on the “invisible wall” created by living and working in different communities.

Mayor Paul began the session by stating that affordability is his number one concern for the City of Lakewood and other metro areas. Mayor Sloan elaborated, explaining that while Golden residents and employees are invested in the community, lack of affordable housing has caused employees to look for housing elsewhere. Sloan and Paul agreed that when residents live in a city other than the city they work in, the commute adds to congestion problems around the Front Range.

While Paul cited that right now the City of Lakewood is adding three jobs for every unit being built, he also stated that Lakewood does not have enough senior living. Paul explained that many younger families are unable to move into Lakewood because seniors want to remain city residents so they are retaining their single-family homes. He joked that residents used to become upset at the thought of affordable housing complexes in neighborhoods, but now many residents are upset about the number of high-end development that makes living and working in the same community difficult.

The public policy forum ended with a large panel discussing Denver’s Green Roof Ordinance. The panel included NAIOP Colorado’s Executive Director of Public Policy Kathie Barstnar, PROLOGIS’ Construction Manager Tom Brangers, Green Roofs of Colorado, LLC owner Andy Creath as well as the Denver Green Roof Initiative Campaign Manager Brandon Rietheimer. Barstnar gave background of the task force assembled by the City of Denver to mitigate concerns of the Green Roof Ordinance, especially concerns that apply to existing buildings. She explained that the ordinance has many unintended consequences and fears that the community may see developers looking to build in other cities. Barstnar and Brangers noted that other concerns of the task force include what weight roofs can support, fiscal problems for smaller business owners and maintenance. Creath stated that while the task force may still be sorting out some solutions, the ordinance was intended to be an environmental initiative to create a more sustainable city for the future, citing cities like Chicago and Toronto who have experienced similar initiatives. He stated that maintenance should not be a large concern.

Riethemier wrapped up the session stating that the green roof initiative is not meant to be anti-development, but instead ask for more responsible sustainability and development.

For more resources on this topic, visit denvergreenroof.org and the City of Denver’s Green Roof Initiative page for newsletters, meeting minutes and upcoming task force meetings.

NAIOP Colorado is hosting a free networking event for members and non-members on Wednesday, April 25, from 5:30 to 7:30 p.m. at Oskar Blues Grill & Brews at 1624 Market in Denver. Register here.

NAIOP Colorado’s 16th Annual Rocky Mountain Real Estate Challenge will take place Thursday, May 3, at 5 p.m. at the Hilton Denver City Denver. This year’s featured project is a 15-acre site located in the Stapleton neighborhood of northeast Denver. Student teams from the University of Colorado and University of Denver will evaluate development opportunities to create their own unique individual project, competing for scholarships and the NAIOP Cup. For more information visit https://www.naiop-colorado.org/Events/ctl/Details/EventId/2337/mid/435.