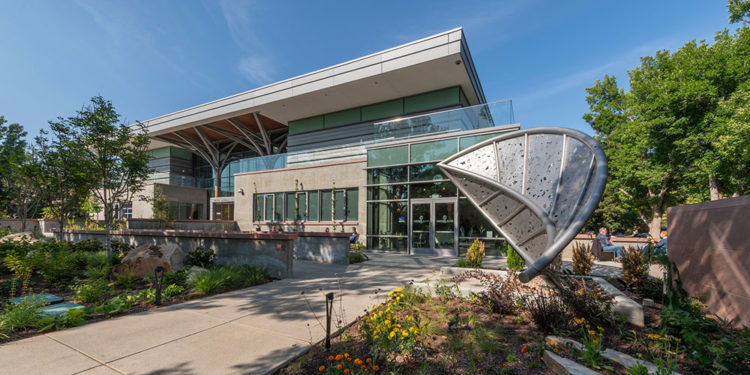 The recently completed LEED Gold Freyer–Newman Center is the crowning jewel and final chapter of a four-phase master development plan at Denver Botanic Gardens. The Master Plan commenced in 2007 and was completed with the construction of the Freyer–Newman Center in 2020. GH Phipps Construction Companies was the general contractor for the project and Davis Partnership Architects was the architect.

Most recently, the center was a recipient of a 2021 Mayor’s Design Award, which honors projects throughout the city for excellence in architecture, exterior design and place-making.

The 50,000-square-foot center houses an array of over 100,000 samples of beautifully preserved vascular plants and fungi in the herbaria along with classrooms, labs, art galleries, a large auditorium/theater, library, archives, and other spaces. The immense structure echoes a modern twist on the grandeur of Smithsonian architecture that is both magnificent and inviting.

Davis Partnership’s concept was to deliver a design that was “humbly iconic” — respecting the existing architecture while re-interpreting the botanical references that influenced the original design. These botanical references are sometimes expressed in structural forms, in the use of materials, and also in the pattern work of details.

Interior of the Freyer–Newman Center

The relationship between GH Phipps Construction Companies and Denver Botanic Gardens dates back to 1964, beginning with the construction of the Boettcher Memorial Tropical Conservatory, an iconic landmark in Denver, housing a two-story constructed banyan tree which serves as the foundation for a tour through hundreds of exotic plants, flowers, and trees. GH Phipps was honored to have been a part of each of the Master Plan’s four phases, including the ACE award-winning Science Pyramid in 2015.

As a certified LEED Gold building for new construction and major renovations, considerable and careful thought went into every stage of the Freyer-Newman Center to demonstrate exemplary leadership in sustainable building practices. With construction on an active campus, care was taken to reroute any curious visitors and correct their path back to exploring other sections of the Gardens. Beyond the safety of students and tourists, there was also considerable attention paid to the preservation of the plant life
found nearby, some of which included rare specimens. Crew members maintained consistency in pathways through the facilities to the site with strategic fencing around the construction area in a way that avoided unnecessary stress on the surrounding vegetation. In the promotion of sustainability and energy alternatives, a solar array on the exterior roof supplemented the building’s electricity and provided cost-saving benefits while staying green.

To successfully execute a project of this magnitude and scope, it is crucial to foster precise collaboration with the owner, design team, and sub-trades. The construction team was not only made up of GH Phipps employees but included hands-on partnerships with both the owner, Brian Vogt and Davis Partnership Architects. The long-standing synergy of this triad came together again on this project resulting in zero workplace incidents, persevered through a pandemic, and exceeding the expectations of the city.

Adam Tormohlen, the project manager, commented on the nature of the team, “This really was a good partnership and we all left the project with so much respect for each other that will be a lasting positive relationship.”

This strategic collaboration between Denver Botanic Gardens and GH Phipps has been an excellent example of natural harmony between owner and contractor. The Freyer-Newman Center is one of the masterpieces of this flourishing relationship.

Before construction commenced, Davis Partnership Architects and Denver Botanic Gardens canvased neighboring residents to garner feedback on the proposed project and were met with a very positive response when addressing their concerns. Along with generous donations from private donors, including Robert and Judi Newman and John and Ginny Freyer, Denver Botanic Gardens was one of the first organizations to receive funding from the Elevate Denver Bond Program whose primary goal was to
deliver projects that are designed to enhance and strengthen the growth of the City.

During the press release, Mayor Michael Hancock held high praise for the project, “As one of the first Elevate Denver-supported projects to break ground, the Freyer – Newman Center is an outstanding example of how these community approved investments can move a project to reality and enhance our world-class museums.” Denver Botanic Gardens CEO, Brian Vogt echoed the Mayor’s sentiments, “We are all filled with gratitude for the completion of the final chapter of our Master Development Plan with this stellar project. Deep appreciation goes to Denver voters for their support of the 2017 General Obligation Bond and to all of the donors, designers, builders, neighbors, staff and volunteers who took us to the finish line.”

Spanning over 24 acres and hosting millions of visitors each year, Denver Botanic Gardens has provided a new facility that gives more reasons to stay longer than the average two hours. The first floor of the center can be enjoyed by members of the public without buying a ticket. The galleries and auditorium upstairs are included in a regular member visit or paid admission.

A Blooming Celebration of Life

With the completion of the Master Development Plan between GH Phipps and Denver Botanic Gardens, the Freyer – Newman Center is certainly the high point ending in a closing chapter. An interactive monument to the achievements of science, the allure of art, and the power of education, the Center embraces people from around the globe, encouraging them to peer a little closer into the world of nature.

In 2022, GH Phipps will celebrate 70 years of work along the front range. The company continues to be one of the largest construction companies in the Colorado region. GH Phipps is known for its work in the healthcare, higher education, K-12, civic and commercial arenas – with a reputation as a trusted partner time and again.

5 Provisions That Must Be in Your Construction Contract