YOU ARE HERE:Home » Architecture » Market Center Renovation Pays Homage to Denver’s Past
ArchitectureConstructionDesignFeatureRetail 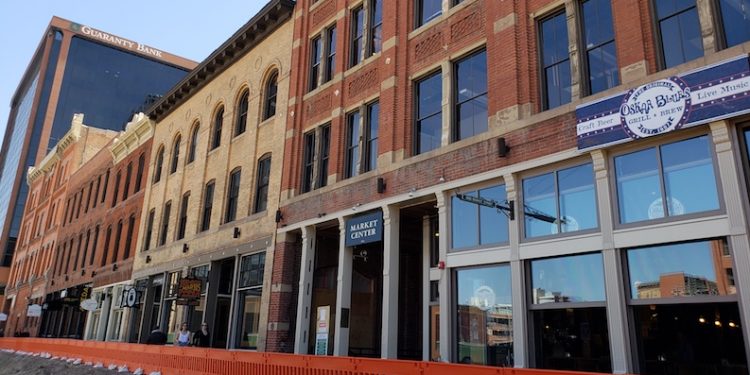 Urban Renaissance Group (URG), Stars Investments and City Street Investors are nearing the completion of some major renovations at Market Center, a five-story office and retail building at 17th and Market streets in downtown Denver. “Since purchasing Market Center, we’ve been thrilled to explore options for renovating these historic buildings,” said URG founder and chief executive officer, Patrick Callahan. “We’re excited to see our plans coming to fruition, ensuring that it is a premier LoDo destination for office and retail tenants.”

Renovations to the 121,000-square-foot complex include exterior and interior upgrades, as well as enhancements to the pedestrian experience and expanded amenities for tenants.

“Our goal with Market Center is place-making at the midway point between Larimer Square and Union Station, while celebrating everything LoDo has to offer and paying respect to the history of the buildings,” said Cristina Dawson, SVP-head of Asset Management at Stars Investments.

The architect for the project is Powers Brown Architecture a professional services firm practicing architecture, interior design, programming and urban design. The firm will oversee the design of the renovation through to completion. Award-winning Tryba Architects were also involved in the early stages of the project. The General Contractor is Bristlecone Construction.

The project consisted of three scopes of work starting with a full mechanical, electrical, and plumbing overhaul of the building.

Built between 1872 and 1902, Market Center includes five buildings stitched together to offer a continuous floor plate. The buildings’ façades were restored to their historic past and the outdoor patio areas have also been expanded and will include new retail and restaurant patios.

According to Tryba’s Senior Associate Sarah Snider Komppa, the five separate buildings were connected in the 1970s and renovated to create basement retail by “pushing” the storefronts away from the sidewalk.

“We were excited to help URG and their partners return the storefronts back to the sidewalk’s edge to make for a more complete pedestrian experience and create better retail frontages,” said Komppa. “As all five buildings are historic, the design of the new storefront windows needed to reflect the original window design as best we could determine from historic photos. We were able to design custom windows that replicate the historic design yet are also operable to allow the restaurants the ability to open their dining areas up to the sidewalk.”

Bristlecone Construction will complete the third and final phase of the historic renovation this summer, which includes a full activation and restoration of Market Street downtown between 16th and 17th street.

“Bristlecone has been honored to be involved in bringing such an iconic building and streetscape within Denver’s historic district back to life over the past year and half,” said Todd Dontai, project manager, Bristlecone.

Construction will expand the current raised sidewalk 10 additional feet to accommodate new patios for four restaurants, as well as add additional space for pedestrians. New irrigation, landscaping, historical rails, pavers, new stairs for pedestrian access from street level and lighting improvements will also take place in addition to structural repairs to the old coal vaults that reside under the sidewalk.

“The original sidewalk on Market Street was raised to serve wagons at a loading dock height, and the new sidewalk (currently under construction) will expand the sidewalk at the raised elevation to allow for greater access, a better pedestrian experience and improved patio seating for the restaurants,” said Komppa.

Retail enhancements are being led by retail experts City Street Investors, a Denver-based company well-known for their involvement with Denver’s Union Station.

“The designs for the expanded sidewalk, large patio spaces, new landscaping and beautiful storefronts have all been enthusiastically received by retailers and restaurants,” said Pat McHenry, principal with City Street Investors.

75 percent of the Market Center renovations are currently finished and a completed-by date is slated for the end of Q3 2018.

The Ramble Hotel in RiNo Opens to Guests