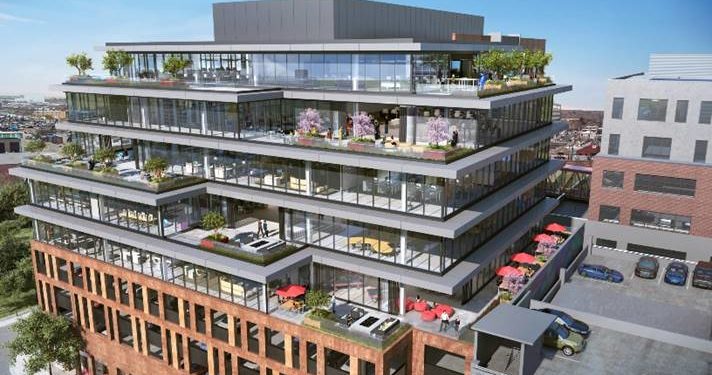 DENVER – Koelbel and Company has officially unveiled plans for its latest office project Watershed, slated to break ground next year, opposite Koelbel’s successful Catalyst HTI development. The nine-story, 180,000-square-foot building in an area of RINo that is destined to become Denver’s Most Iconic New Business District.

L&M Capital Investments, a family-owned business that has owned property/land in the RiNo District since 1968, is partnering with Koelbel on the Watershed project. The architect is Gensler and the general contractor is JE Dunn.

Watershed will include more than 9,000 square feet of dedicated/private outdoor space — a rare commodity in the Denver commercial landscape. The building’s design integrates a series of eight stepping patio outdoor spaces cascading toward the Platte River. Experiential retail located along the “paseo” – from Brighton Boulevard into the activated alley – will be a draw for the building’s tenants and visitors alike. Watershed’s western façade is accessible and open to respond to the river and mountains. A daylit vertical stair pulled to the building’s exterior serves as a connector between building and neighborhood, linking workspace to the abundance of amenities that define the playground of RiNo. 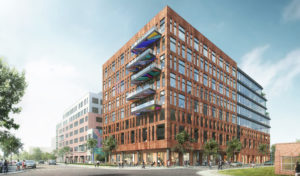 According to Dean Koelbel, director of Leasing Operations for Koelbel, who oversees Watershed, one of the most powerful attributes of the innovative complex is its access to top talent and public and commuter transit.

“The building itself will be a draw to potential employees and the proximity to where they live is significant to companies looking to attract the top talent – especially the ones relocating from out of state,” says Dean Koelbel. “We believe we’re at the peak of the bell curve. Larger tech companies understand that RiNo is the place to be in Denver.”

Watershed’s striking, masonry façade will create a timeless presence on Brighton Boulevard, punctuated by the artful nature of window apertures, balconies, and pockets of open space breaking up large floor plates. Options for inter-floor connectivity and customization will allow the building to synthesize its creative occupants. Watershed’s architecture embodies the fluid undercurrents that define RiNo; creativity, ingenuity, risk, and transformation.

When Catalyst was introduced to the market, the mix of amenities offered to tenants set the tone for new commercial projects in our market,” said Jon Gambrill, principal at Gensler, the architect for the project.  “Watershed represents this continuation of that dynamic vision to push the boundary in our market of how a building and the amenities within can create a thriving community that supports any and all companies housed within. We are also excited that this development will be recognized by tenants for supporting how they work at a different level and will become the turning point for RiNo’s commercial viability.”

Drawing on its long history of attracting top-tier companies to the region, Koelbel views Watershed and Catalyst as forces tapping into a groundswell of energy by companies choosing to relocate to this iconic new business district.

“Koelbel’s involvement in RiNo started with Industry, a collaborative office complex, followed by Catalyst and now Watershed,” said Buz Koelbel, president of Koelbel and Company. “Collectively, they represent the flagship buildings of our commercial portfolio. The River Promenade district and all it will offer to the area can’t be found anywhere else in Denver; and will surely make RiNo the location of choice for Denver employers.”