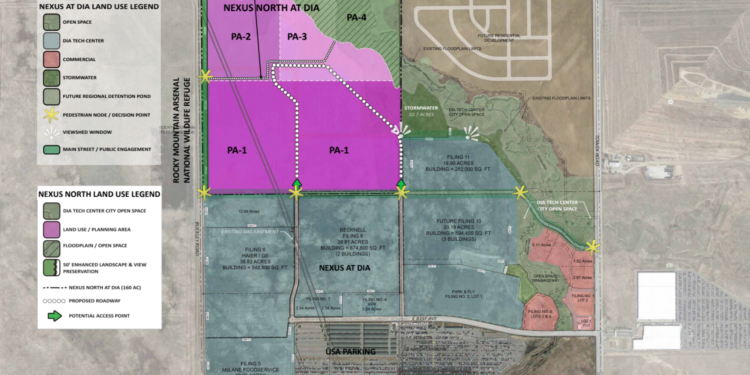 Looking back at 50-plus years of land development in Colorado Springs, Denver, Phoenix, and Portland, Schuck Communities and its team have developed, repositioned, and revitalized sites for hundreds of projects that have become the communities that residents and businesses call home today, where they work, shop, and play. 2019 is a special year for Schuck Communities as it celebrates its 50th Anniversary and the leadership team is excited to share the history of how its vision turned raw ground into neighborhoods, centers for business commerce, and thriving communities. A quick look at a map detailing all Schuck developed projects gives a clear picture of their positive impact on communities over the past 50 years. Some of Schuck Communities’ current projects are in Metro Denver (Commerce City and Loveland), Monument, and Colorado Springs, with several others in the pipeline.

Schuck Communities acquired, rezoned and is currently developing a 170-acre, mixed-use commercial business park named Conexus, a strategically positioned commerce park for employers who want to be ideally located between Colorado Springs and Denver markets. With almost a mile of highly visible I-25 frontage, Conexus is ideally located while being conveniently accessed by both Baptist Road and Highway 105 interchanges with I-25.

Nexus is home to McLane Foods’ new 240,000-square-foot facility and Haier’s (GE Appliance) new 540,000-square-foot distribution center. Several other sites have been sold to major users (to be identified shortly) who are expected to bring significant jobs and tax base to Commerce City and Adams County. Economic development support, tax credits, energy cost savings programs, and a host of other tools are provided by Commerce City, Adams County and the State of
Colorado.

According to Commerce City Economic Development officials, Nexus is a thriving development that is generating new and growing businesses, multiple investments, and very attractive jobs. In recognition of this, Commerce City Economic Development officials awarded the Nexus Team its 2018 Economic Development Award for Leadership. The award recognizes businesses that have been catalysts for economic vitality through creative leadership, innovation, facilitation, collaboration or contribution of resources. This project continues the Schuck Communities legacy of contributing leadership, growth and building innovation.

“With a superior property location, the majority of primary infrastructure already complete or under development, and the ability to quickly obtain site plan and final plan approvals by Commerce City, Nexus has already become a premier industrial technology park,” said Steve Schuck, chairman of the board, Schuck Communities.

Schuck Communities has injected expertise and energy in the form of marketing, engineering, financing and relationships and has navigated, established and completed public-private partnerships critical to success. “Nexus occupants are fortunate to have excellent support from both Commerce City elected officials and staff.” A quick online search of the latest industrial activity in Denver references Nexus at DIA and Nexus North as “spearheading the hot market industrial activity in Denver’s northeast region,” said Brock Chapman, CEO, Schuck Communities.