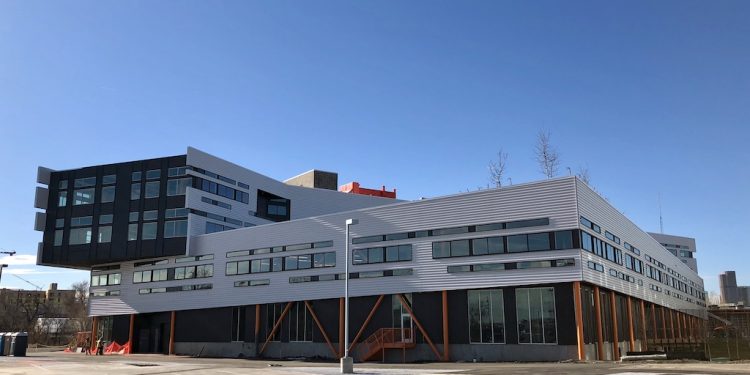 FLIGHT is the latest addition to Zeppelin's mixed-use TAXI community.

Zeppelin Development’s impressive new, 140,000-square-foot FLIGHT office building is already home to Denver-based Boa Technology, an innovative producer of rotary foot wear bindings, and later this month the design-forward, environmentally conscious building will be home to some new tenants, eager to secure their space inside Denver’s most progressive office building in the heart of RiNo’s vibrant Art District.

Located at 3575 Ringsby Court, FLIGHT is the newest addition to Zeppelin’s mixed-use TAXI community. Strategically placed in between Denver’s major thoroughfares and the Platte River, the community connects its tenants to downtown and surrounding areas with ease.

FLIGHT boasts one of the city’s largest private green roofs and anticipates receiving Platinum certification from the US Green Building Council. Designed by Denver-based Dynia Architects and built by Vertix Builders, the project houses an entire research-and-development department with full engineering capabilities, which is a rare juxtaposition for an office space in the urban core.

Dynia is best known for modern architecture that’s inspired by and stays true to the context of its location, which is especially evident throughout the former-industrial TAXI site. In addition to overall conceptualization of the building, Dynia Architects designed custom office spaces and common areas within FLIGHT’s interiors.

The company first moved into TAXI in 2012 and has experienced major growth. Maintaining its global headquarters in Denver, Boa and its proprietary closure system has seen international success with offices in Austria, Japan, Hong Kong, and China, and with more than 300 brand partners worldwide.

“Boa also shares in our values of collaboration, community and humanity as the core of a successful and growing entrepreneurial business,” said Kyle Zeppelin.  “They are an integral part of the culture at TAXI, and by commissioning a building that harnesses these principles to specifically meet their needs, we’re ensuring a thriving partnership for many more years to come – with a homegrown, Denver success story that we’ve watched take form under our roof at TAXI.” According to Dynia, the company’s complex program includes an assembly space in the form of an auditorium stairway that connects the two levels and spills out onto an exterior terrace. Perched atop the base, Dynia says, are two stories of small suites housed in a faceted, linear building form. Intermittent garage doors allow access to one of the largest landscaped roofs in Colorado.

The top story suites  at FLIGHT make use of glass at the floor level to access river views and shared board rooms allow smaller tenants generous meeting spaces. A common lobby on the ground floor includes an artist studio, opening to the river, and programed to allow for a variety of cultural activities.

The global conservation organization is the latest tenant to announce a move into FLIGHT that will launch a sustainability accelerator program from its new headquarters in River North.  The program, which is being pursued in conjunction with Techstars (a worldwide network helping entrepreneurs to succeed), will pursue potential technology breakthroughs that will accelerate the protection of nature at scale.

The program is synergistic to the FLIGHT building, which has one of the most extensive green roof’s in the state, with spaces that open up to rolling hills and tree groves along with integrated solar arrays. The FLIGHT rooftop predated the green roof initiative, which was originally backed and promoted by Zeppelin Development. The building, is among the most high performing commercial projects in Denver, representing the consistent direction of TAXI.

“FLIGHT is pushing the envelope further with green infrastructure and building performance, not only on its rooftop, but in regards to people-friendly connectivity, including mass transit, bike paths, and the reuse of former industrial sites,” said Zeppelin. “The Nature Conservancy is a perfect complement to our goals, as we are to theirs.”

FLIGHT features dynamic amenities such as a two-story atrium, outdoor meeting spaces and a 100-bike storage facility. In addition to the 13,000-square-foot green roof, a 170 Kilowatt solar photovoltaic array will offset about 20 percent of the building’s electricity use. With the addition of FLIGHT, TAXI is now home to one of the largest single-tenant office spaces in the River North Art District neighborhood.

According to Stephen Dynia of Dynia Architects, the name “Flight” originated with the idea that the upper stories reach past site boundaries to connect existing and future structures. That is achieved by a velocity of window pattern and building skin that extends past the ends of interior space, poetically suggesting infinate continuity. Flight extends the pattern of linear “land-scrapers” north along the west bank of the Platte River. Not only is Vertix Builders the general contractor for FLIGHT, the company liked their finished product so much they decided to move in.

“The Flight office building is an incredible space with an inspiring design that required a team of contractors willing to think outside the box and address unique challenges,” said Ryan Bonner, president of Vertix Builders. “Many aspects at Flight are atypical, including angles and outcroppings, that rarely happen in other construction projects.  We worked closely with the design team to construct a roof that could maximize the photovoltaics and solar energy to make Flight one of the highest performing commercial projects in Denver.  It was an honor and pleasure to work on one of the most progressive new office buildings in the state.”

A multi-faceted team of commercial builders, building designers, experienced contractors, and everything in between, Denver Design Build is also excited to be a part of the FLIGHT community.

“We made the decision to move our Commercial Division to an office suite in the development early in 2018. As a leading developer in the Denver community, Zepplin exemplifies the ideals of our firm, and many others,” says Ches Arms, general manager, Denver Design Build. “The spaces are thoughtfully planned with an emphasis on healthy and happy employees. With everything from ergonomic chairs to adjustable sit/stand desks, our team is just as excited to start using the space as we are to have them there. We’re looking forward to a late April 2018 move-in date.”