YOU ARE HERE:Home » Construction » Denver’s Most Famous Block to be Revitalized
ConstructionDesignDevelopmentFeatureHospitalityMultifamilyRetailSustainability

Denver’s Most Famous Block to be Revitalized 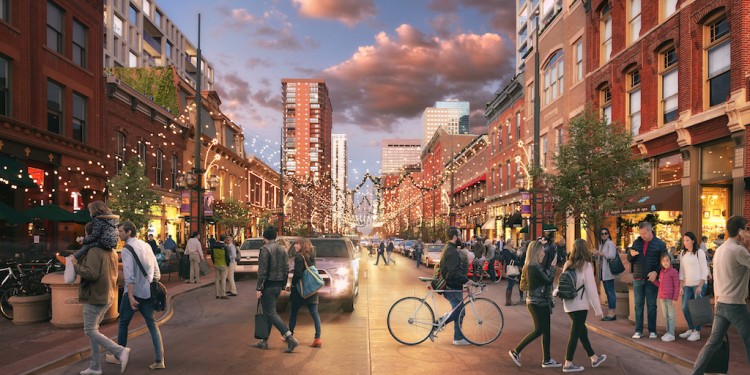 Pending approval from the city, Denver’s iconic Larimer Square will undergo a major revitalization over the next several years that will include work to preserve the existing infrastructure as well as the addition of two new buildings, to be built in the alleys behind Larimer Square. Jeff Hermanson, in partnership with Denver-based Urban Villages, Inc., has outlined a strategy to invest in the block for decades to come, while retaining its unique status as Denver’s oldest historic district.

“Larimer Square is a world-renowned destination due to its careful management, thoughtful investment and unwavering public support,” said Jeff Hermanson, Larimer Square’s steward for the past 25 years. “Our intention is to invest heavily in the block so that it continues to stand the test of time. We want to preserve all that is special and historic while ensuring this iconic block remains vibrant for generations to come.”

The investment plan calls for restoring deteriorating infrastructure and “ushering in the next phase” for this unique, historic area. “We are starting to see that these 100 to 130-year-old buildings are really beginning to show their age,” said Jon Buerge, chief development officer at Urban Villages. “We are seeing some structural degradation, a lot of the stone and brick façades need major refurbishment, mechanical systems are virtually all needing to be repaired and roofs need to be replaced — there’s significant work that needs to be done.”

Two new buildings are proposed, one of which will be dedicated to much-needed affordable housing, built in the most desirable part of downtown Denver. Many of the people who make Larimer Square such a premier destination, including restaurant workers, boutique employees and small business staff, cannot live near the block or within the city limits due to rising housing costs.

The second building will be a mixed-use building that will include retail on the ground floor, a hotel on the mid levels, a sizable amenity deck housing restaurants and bars, a public viewing deck, and above that for sale condominiums.

In order to maintain the historic integrity and character of the block, the two new proposed buildings will be located on the alleys and underutilized courtyards behind Larimer Square. According to Buerge, the block of Larimer Square is 125 feet long and Urban Villages plans to implement a 60 foot set back, allowing them 65 feet width on the alley side to build a new building. “We wanted to make sure that the pedestrian experience on Larimer Square remained intact and that we did not detract from the historic nature of the buildings and also by placing the two buildings on the alley side, we were able to really limit the impact on the heritage buildings,” said Buerge.

The block’s historic brick alleys will be revitalized and refurbished to become a fully activated pedestrian corridor where an eclectic blend of retail and public spaces can thrive. The alley corridor will offer incubator spaces for burgeoning ideas and businesses that otherwise wouldn’t have the opportunity to grow in downtown Denver.

As for any impact to existing businesses in Larimer Square, both Urban Villages and Hermanson believe that the development will only have a positive impact, helping to invigorate businesses by increasing foot traffic and creating more jobs. “By putting this type of investment into central Denver, it will attract other developers and businesses to locate closer to the area,” said Buerge.

The development plan also includes an array of rooftop urban gardens and small farms — to be built on both the new and existing buildings — that will grow produce for the restaurants that operate in and around Larimer Square.

“I started out as a restauranteur in my 20s and it’s exciting to think that we could do a project here that would actually grow food on the roofs to be served in the restaurants and house those employees that work in the restaurants,” said Hermanson. “It’s really our opportunity to be transformative, to create an inclusive community and address some of the challenges that our city and other cities are facing — I think the cities that solve or make dents in the housing issue will be cities that prosper in the future.”

Urban Villages have been involved in agriculture for more than 10 years and their sister company Biological Capital is a major player in agriculture.

“This is not something that’s responsive. We really believe that with the chef driven restaurants that Jeff has pioneered in this area, that integration to food is a critical component of the placemaking in Larimer Square,” said Buerge. “When food is grown sustainably on the rooftops and served in the restaurants, it really creates that true farm-to-table experience which we think is really important.”

The development team projects the revitalization of the block to take several years, commencing in 2019 upon all necessary approvals from city leaders.